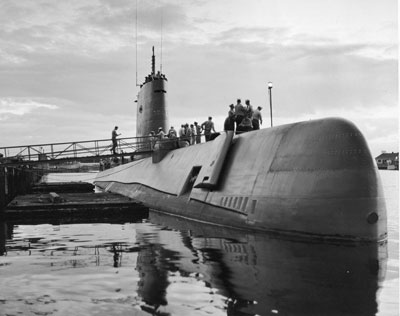 On July 23, 1958, crew members board the nuclear-powered submarine USS Nautilus (SSN-571). This historic voyage took the crew from Pearl Harbor, Hawaii, to the North Pole.
US Navy/Time & Life Pictures/Getty Images

During the Cold War, the United States and the Soviet Union targeted each other with a full array of nuclear weapons. And within the arsenal of nuclear weapons was the nuclear submarine. Though it wasn't technically a weapon itself, the nuclear sub was an incredibly lethal machine, carrying ballistic missiles around the world -- even beneath the polar ice caps. What's more, these subs could circumvent the oceans virtually unnoticed, hidden until the time came to launch hundreds of missiles and strike enemy territory.

Nuclear submarines get the "nuclear" moniker from their nuclear reactor power source, not from the weaponry they carry. During the Cold War, nuclear submarines were the third part of a strategic deterrence triad that included land-based missile silos and airplanes with nuclear payloads. The U.S. alone maintained 41 ballistic-missile nuclear subs -- the "41 for Freedom" -- during the Cold War, and each had the nuclear payload to strike a crushing blow to any nation on Earth. In addition to the boomers, which were the missile-armed nuclear U.S. subs, there were fast attacks, nuclear-powered submarines designed to hunt down and (if need be) destroy enemy submarines or surface vessels.

When the Soviet Union collapsed in 1991, the Cold War was effectively over. The once formidable Soviet navy soon turned into an aging, poorly maintained fleet that the Russians couldn't financially maintain. To this day, there are dozens of USSR nuclear subs rusting in Russian ports, their nuclear reactors filled with spent fuel that's yet to be disposed of.

By contrast, in 2002 the U.S. still had in service 71 nuclear submarines: 53 fast attacks and 18 ballistic missile subs (four of those ballistic missile subs have since been converted into new attack subs). And in 1999, there were 129 nuclear reactors still used by the Navy. This number accounts for the submarines that are powered by two reactors as well as a handful of nuclear-powered research vessels [source: Brookings].

But do the world's navies still need all of these attack and ballistic missile subs? Is having such a large deterrent force still justified when we're not squaring off against a navy of equal power? 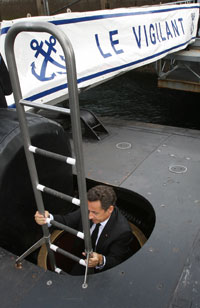 Why a Draft Would Weaken the U.S. Military
How to Become an Army Interpreter or Translator
How NCO Professional Development Ribbons Work