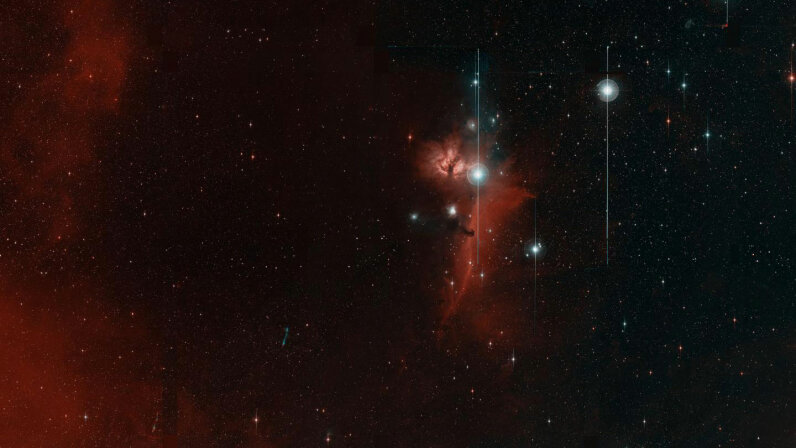 The ZTF took this "first light" image on Nov. 1, 2017, after being installed at the 48-inch Samuel Oschin Telescope at Palomar Observatory. The Horsehead nebula is near center. Each ZTF image covers a sky area equal to 247 full moons. Caltech Optical Observatories

Our humble vantage point on Earth makes the night sky seems like a somewhat static scene. But in reality the space around us is ablaze with spectacular phenomena, such as supernovas (exploding stars) and comets, that fairly swarm the heavens. Tracking these events is now a little easier thanks to the Zwicky Transient Facility (ZTF) at the Palomar Observatory in San Diego. Scientists from the California Institute of Technology (Caltech), the University of Washington and eight other institutions announced the camera's launching in mid-November.

The ZTF is a robotic camera that's attached to the 48-inch (1.2-meter) Samuel Oschin telescope, which has been scanning the skies since the World War II era. ZTF will operate from early 2018 to the end of 2020, likely witnessing tens of thousands of transient events like the blooming of distant exploding stars, asteroids and planets caught in the inexorable pull of giant black holes.

The 576-megapixel camera captures a full 47 degrees of the northern sky in just a single image – that's about seven times as much of the sky as earlier versions. For your reference, the sky all around Earth is about 40,000 square degrees, and the ZTF captures 3,750 square degrees of the heavens every hour. After three nights of work, the ZTF will have accumulated images of the entire night sky.

The ZTF installed on the 1.2-meter diameter Samuel Oschin Telescope. The large-format camera at the heart of the ZTF is located inside the telescope tube, at the focus of the primary mirror.
Caltech Optical Observatories

The system processes those images two-and-a-half times faster than older cameras, meaning researchers can take more pictures, spotting ephemeral events that slower devices would miss. But, that's only if they have the hard drive space – each image from the camera devours about 4 terabytes of storage capacity once they've been processed by Caltech's Infrared Processing and Analysis Center.

Each image has a resolution of about 24,000 by 24,000 pixels. The pictures are so big that they're difficult to view on a single display – one researcher estimates that you'd need about 72 average computer monitors to see one of ZTF's full-resolution images.

ZTF's primary role is to simply capture and identify transients in the sky. Later, other facilities will help sort through the massive amounts of openly published data that the entire astronomy community can view. And there will be even bigger telescopes to come, like the Large Synoptic Survey Telescope.

Now That's Interesting
The project gets its name from Fritz Zwicky, the first astrophysicist to conduct research at Caltech. During his decades-long career, Zwicky spotted about 120 supernovas. In stark contrast, the instrument that bears his name should capture a fresh supernova (less than 24 hours old) every single night.