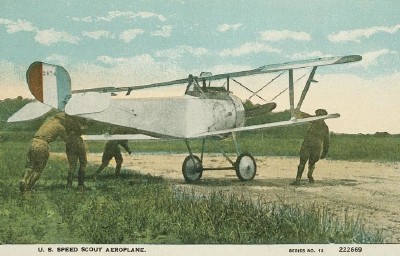 'V-strut' engineering dominated the French Nieuport 17. The quick-climbing plane was flown in World War I combat by seven countries, and many of its pilots became aces.

The Nieuport 17 was part of a series of classic airplane designs that emerged early in World War I with the beautiful little Nieuport 11, the 'Bebe' (Baby). The Bebe was succeeded by a long series of successful Nieuport fighters that included the 17, 23, 24, 25, 27, 28, and, too late for World War I combat, the 29.

The Nieuport 17 incorporated ideas of Eduoard Nieuport and Franz Schneider, who hoped to arrive at the optimum combination of the best features of monoplanes and biplanes in what was termed the "sesquiplane" (one and one-half wing) configuration. The Nieuport 17 featured a large top wing and a smaller and narrower lower wing, joined by a V-shaped strut. This combination gave most of the great visibility and low drag of a parasol monoplane, plus the structural bracing of a biplane. It was given to Gustave Delage to develop the concept into fighter-plane designs.

The Nieuport 17, which like the later Sopwith Camel had its pilot, fuel, engine, and guns concentrated in a small area, had excellent maneuverability and was a pleasure to fly. When the Nieuport 17 first appeared in March 1916, the French had not perfected a suitable synchronizing device to allow safe firing through the spinning blades of the propeller, so the Lewis gun was mounted over the top wing. A synchronized gun was fitted later.

The Nieuport 17's maneuverability gave it a distinct edge over less-agile planes. The United States, which never flew the Nieuport 17 in World War I combat, purchased it in quantity for use as a trainer.

The Nieuport 17 equipped French, Russian, British, Belgian, and Italian units, and was used by many of the great aces, including 72-victory winner Billy Bishop, the indestructible Charles Nungesser, and the legendary violin-playing ace, Albert Ball.

A classic airplane, the Nieuport 17 greatly influenced German design. An exact copy was produced in Germany as the Siemens D.1 and was used on the both the eastern and western fronts. Many other companies also copied the Nieuport 17's V-strut layout.