Where Do Nomad Planets Come From? 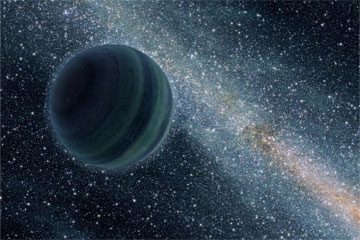 This artist's conception illustrates a Jupiter-like planet alone in the dark of space, floating freely without a parent star. In 2011, Astronomers uncovered evidence for 10 such lone worlds, thought to have been "booted," or ejected, from developing solar systems.
Image courtesy NASA/JPL-Caltech

Let's get some background on what could prove to be very common planets. So far, much of what scientists have assumed about nomad planets is derived from what we've already learned from studying our own solar system and younger solar systems in our galaxy.

As far as we know, they can range in a variety of sizes and makeups. Remember, the first nomad planets to appear in Sumi's findings were Jupiter-class planets. So it's not unreasonable to assume that smaller planets with less mass could go rogue, too. In fact, the smaller ones may be better candidates for being pushed out of a young planetary system; the larger ones may be "born" rogue; that is, arise from star-forming clusters.

The idea behind ejection is that nomad planets are subject to gravitational pulls from a variety of sources, ranging from other stars to nearby planets. To give an example of how this might work, scientists have observed Jupiter-sized planets in other solar systems that maintain orbits very close to their sun (think Mercury or Venus close). Now imagine if our own Jupiter started slowly shortening its orbit and moving closer to the sun. Its mass is more than 300 times greater than Earth's, giving it a substantial gravitational field.

As a planet the size of Jupiter moves inward, it would disrupt the path of many planets, moons and dwarf planets in its vicinity by drawing smaller planets toward it. The on-and-off tug of a passing large planet could pull smaller planets out of their orbital paths. As their orbits changed, they could get slung from the solar system and into the void. It's a lot like how we use the gravitational pulls of planets and moons to slingshot satellites farther out into space, only this time we're talking about a planet, rather than a spacecraft, being given a gravity assist. That's just one example of how a planet can get thrown off course.

Another proposal holds that a planet could be ejected from its solar system if its star turns into a supernova. Of course, some planets would be destroyed in the violent explosion, but those orbiting farther out would get pushed outward into space, untethered to a home star.

Once outside of a solar system, a nomad planet can fall under a variety of gravitational influences. Computer models have shown that if a planet is tossed out early in a star cluster's life, that planet is more likely to be drawn into a wide, loose orbit around another neighboring star. The bigger the star, the more likely it is to recapture a nomad planet. Computer models also show that it's highly possible for nomad planets to be captured by the gravitational pull of black holes [source: Perets].

Other possibilities include planets traveling within the larger orbit of the Milky Way galaxy. This means that they are still on the galactic dance floor and moving with the crowd, but they just aren't traveling within a group. And finally, it's completely possible that two nomad planets could meet and form their own binary system -- just a couple of lonely planets romantically twirling around each other in the emptiness of space. Suddenly nomad planets sound a lot less menacing, right?