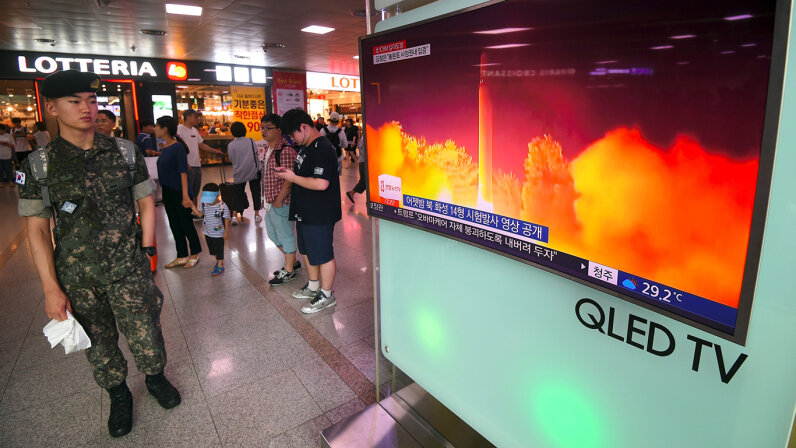 In August 2017, North Korea and Kim Jong Un brought the world to the brink of nuclear war when Kim threatened to attack the U.S. territory of Guam. U.S. President Donald Trump answered the North Korean leader by saying he'd respond with "fire and fury like the world has never seen" if Kim continued to intimidate the United States and its allies. Rhetoric between the two leaders lasted for days while citizens of Guam and other nations worried if Kim actually had the capability to launch a nuclear attack on its neighbors, let alone had a nuclear warhead small enough to fit on to a missile that could reach the United States.

While North Korea has long made claims it has "miniaturized" nuclear warheads, international experts have doubted them. But an analysis completed in July 2017 by the U.S. Defense Intelligence Agency says otherwise. According to the Washington Post, U.S. intelligence officials now say North Korea has in fact produced a miniaturized nuclear warhead that can fit inside its missiles, meaning the rogue state is on the verge of becoming a full-fledged nuclear power. The analysis comes after another U.S. intelligence assessment that also upped the official estimate for the total number of nuclear bombs in North Korea's arsenal to 60, though other experts says it's much fewer than that.

Since 2006, North Korea has tested nuclear explosive devices in 2006, 2009, 2013 and twice in 2016. According to the Nuclear Threat Initiative, the DPRK is also capable of enriching uranium and producing weapons-grade plutonium, and believed to possess biological and chemical weapons. The regime also successfully tested two intercontinental ballistic missiles (ICBMs), the Hwasong-14, that could potentially reach the United States. The first was on July 4, 2017, which North Korea's state media said flew 580 miles (933 kilometers), reached an altitude of 1,741 miles (2,801 kilometers) and was airborne for nearly 40 minutes. The second and most recent ICBM was launched from Mupyong-ni on July 28, 2017, and traveled about 621 miles (1,000 kilometers) into the Sea of Japan, according to the U.S. Department of Defense. U.S. Secretary of State Rex Tillerson released a statement condemning both ICBM launches and calling for the international community to stand strong against North Korea by maintaining and strengthening U.N. sanctions. "The United States strongly condemns North Korea's launch of an intercontinental ballistic missile, the second this month, in blatant violation of multiple United Nations Security Council resolutions that reflect the will of the international community," Secretary Tillerson said.

North Korea has also continued to test its short-range rockets, including the submarine-launched ballistic missile SLBM-Polaris 1, which it launched in 2014 and 2015, as well as a failed test of the KN-11 SLBM in 2015. On March 24, 2016, it conducted tests of a solid-fueled rocket motor, and on April 23, 2016 a successful test of what experts believe was a genuine solid-fueled SLBM that flew about 18 miles (30 kilometers). But a few months later in August, North Korea launched a second solid-fueled SLBM, which traveled 310 miles (500 kilometers) landing in Japan's air defense identification zone.

And as late as Aug. 23, 2017, North Korea's state media released photos of what appears to show designs of one or two new missiles. "This is the North Koreans showing us, or at least portraying, that their solid-fuel missile program is improving at a steady rate," David Schmerler, research associate at the Middlebury Institute of International Studies at Monterey's James Martin Center for Nonproliferation Studies, told CNN. Solid fuel missiles are faster and easier to deploy because they're always fueled.

So North Korea's clearly advancing its nuclear arsenal. So what now? And what countries are most at risk?

What Countries Are Most at Risk? 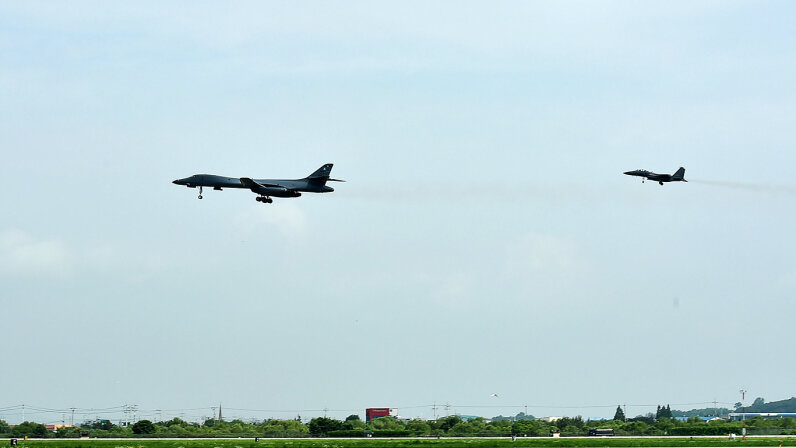 Pentagon spokesman Capt. Jeff Davis confirmed the North Korea's ICBM launch on July 28, 2017 in press statement, saying U.S. Department of Defense detected and tracked a single North Korea missile, but North American Aerospace Defense Command (NORAD) determined the missile did not pose a threat to North America. But Melissa Hanham, senior research associate with the East Asia Nonproliferation Program at the Middlebury Institute, told NPR's Robert Siegel a slightly different story. "It does appear that at a minimum this missile may go up to 10,000 kilometers (6,200 miles), but it may go as far as 11,000 kilometers (6,800 miles)," she said. "And that puts all of the West Coast and the Midwest in range at 10,000 kilometers, and at 11,000 kilometers, pretty much every U.S. state but Florida is in range."

But those most at risk are U.S. allies and territories in the Korean Peninsula, including Japan, South Korea and Guam. Kim's threats to the 25 million people of Seoul are nothing new. But the stakes are raised now that it appears North Korea has the capability to launch missiles that can reach the Sea of Japan, Guam, and perhaps Hawaii, Alaska and even the mainland U.S. Guam is a likely target because of its strategic U.S. military base, which is home to nuclear-equipped bombers that can strike North Korea within minutes. The U.S. territory's governor, Eddie Baza Calvo, spoke to the citizens of Guam to bring calm to the island. "I want to reassure the people of Guam that currently there is no threat to our island or the Marianas," he said in a video statement on Aug. 9, 2017. (As of Aug. 15, 2017, according to North Korea's official news agency, Kim reviewed a report from his army on its plans to fire missiles at Guam and said he will continue to monitor the actions of the United States before carrying out any planned attacks.)

While there seems to be little debate anymore that North Korea's long-range missiles can reach the United States — or at least territories of the United States — there is no doubt at all that its short-range missiles can reach its neighbors. Japan and South Korea are the most likely targets of North Korea's threats, whether those measures are conventional or nuclear. The U.S. military has significant assets in both countries, and analysts predict that a nuclear strike anywhere would be devastating. The only response to an attack from North Korea would be to employ the Terminal High Altitude Area Defense (THAAD) missile defense system, which can intercept and shoot down short, medium and intermediate ballistic missiles inside or outside the atmosphere. It can't, however, intercept ICBMs, the type of missile North Korea successfully tested July 28.

And then there is the fear that has Washington truly concerned: that North Korea sells its weapons to consumers who are not U.S. allies. Speaker of the House Paul Ryan told audience members of a CNN townhall meeting held Aug. 21, 2017 that North Korea having nuclear-tipped warheads capable of striking the United States was "not a good thing. But it's not just that they would launch a missile to the United States. What I worry most about is that they'll sell one. I worry that they're going to proliferate, that they're going to sell it to the highest bidder, to a terrorist. That is why this is a serious issue."

In response to Kim's threats to the United States and its allies and interests, the U.N. Security Council voted unanimously in August 2017 to impose strict new sanctions on North Korea's international trade. The sanctions could cost Pyongyang as much as $1 billion a year, a huge price to pay for such a poor country. The goal of the sanctions is to get Kim to abandon his nuclear weapons program, or to get his regime to at least start to negotiate. But sanctions have failed in the past.

The U.S. military has been showing its forces in the Pacific, too. Just days after North Korea's successful ICBM launch on July 28, the United States Air Force flew two B-1B bombers over the Korean Peninsula. Counterparts from the Republic of Korea and Japanese air forces escorted the B-1 bombers as they flew over an air base near Seoul before returning to the Andersen Air Force Base in Guam, the U.S. Pacific Air Forces said in a statement.

"North Korea remains the most urgent threat to regional stability," General Terrence J. O'Shaughnessy, Pacific Air Forces commander, said in a statement. "Diplomacy remains the lead; however, we have a responsibility to our allies and our nation to showcase our unwavering commitment while planning for the worst-case scenario. If called upon, we are ready to respond with rapid, lethal, and overwhelming force at a time and place of our choosing."

How to solve the North Korean problem has been an issue for decades, but this latest threat from the Kim regime could mean a full-blown nuclear conflict is closer than ever. David Wright, physicist and co-director of the Union of Concerned Scientists Global Security Program, said he thinks North Korea's July ICBM test shows that Kim's regime now is capable of launching missiles that can reach the U.S. West Coast, as well as several major U.S. cities. "Los Angeles, Denver, and Chicago appear to be well within range of this missile, and Boston and New York may be just within range," he said in a blog post. "It is important to keep in mind that we do not know the mass of the payload the missile carried on this test. If it was lighter than the actual warhead the missile would carry, the ranges would be shorter than those estimated."