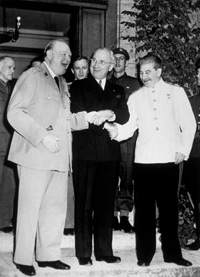 ­I­n the aftermath of Hiroshima and Nagasaki, the United Nations established the Atomic Energy Commission (AEC) in an attempt to disarm any and all nuclear weapons and establish international control on atomic information. An initial plan from the United States, informally titled the Acheson-Lilienthal Report, suggested an international "Atomic Development Authority" that would control a monopoly on weapons and information. A subsequent revision of the report called the Baruch Plan (named after its author, Bernard Baruch) was nearly the same, except it included harsh penalties for nations who violated the plan's rules.

The Soviets rejected the plan outright, arguing that the U.S. was too far ahead in weapons development and would remain so until more details for international control were worked out. Americans, according to the Soviets, would use this lead to their advantage. Russia instead suggested the complete disarmament of nuclear weapons.

Any hope of agreement was lost -- Soviet-American relations were already in sharp decline by 1946. Russian diplomats sent the U.S. State Department an unusually long telegram in February that explained a distressingly hostile policy towards America (you can read all five parts of the message here). Winston Churchill warned against communism in his famous "Iron Curtain" speech on March 5, claiming that the Soviets desired "the fruits of war and the indefinite expansion of their power and doctrines" [source: The History Guide]. Given that the Baruch Plan wasn't delivered until June of that year, a breakdown in relations between the two nations was well under way.

Soon after efforts over nuclear control crumbled, the U.S. went right back to business with testing nuclear bombs. In July, the military invited a large gathering of press members, congressmen and military officers to demonstrate a nuclear bomb's effect on large fleets of Navy ships. These tests, under the name "Operation Crossroads," were airborne and underwater attempts at Bikini Atoll in the Marshall Islands, located in the Pacific Ocean. The first test on July 1, called Shot ABLE, performed as well as the Trinity and Nagasaki bombs, but a missed target made it less impressive. The second test on July 25, Shot BAKER, surpassed expectations. The blast destroyed or damaged 74 empty ships, shooting thousands of tons of water into the air. Worse, dangerous levels of radiation spread around the area, cancelling a third test. The display succeeded in demonstrating the power of the bomb to a much wider audience.

The Soviets, meanwhile, had known about the U.S. bomb project for a long time. German-born physicist Klaus Fuchs was among the British scientists working at Los Alamos during the Manhattan Project. Although officials didn't find out until 1948, Fuchs had been passing information about nuclear bombs to the Soviet Union since 1945. By August 1949, the Soviets detonated their own atomic bomb, nicknamed "Joe 1" by Americans after Russian leader Joseph Stalin, in Kazakhstan.

To learn about the scramble for more bombs -- and more powerful bombs -- read the next page.