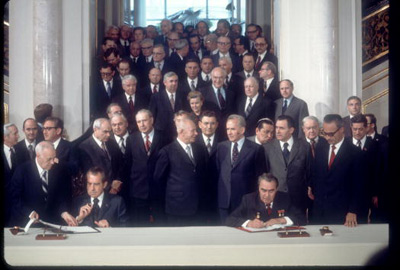 The SALT I sessions continued in the early '70s, and by May 1972 President Nixon and Leonid Brezhnev signed a series of treaties, including the Anti-Ballistic Missile (ABM) Treaty. The limitation of ABMs became an important step -- although they were defense systems, an excess of anti-ballistic missiles actually encouraged offense. If one country knew it had a better chance of stopping attacks than the other, it would have less to lose in a nuclear war. With the ABM Treaty, the United States and the Soviet Union agreed to maintain just two ABM sites each.

Despite perceived improvements in international relations, everything wasn't exactly rosy. A U.S. development in nuclear weapon technology during this era was multiple independently targetable reentry vehicles (MIRVs) -- single missiles that could target multiple cities with several nuclear warheads. MIRVs could easily overcome a limited defense system comprised of only two ABMs. The ABM Treaty never addressed this innovation, and during the '70s America and the Soviets would add more than 12,000 nuclear weapons to their stocks.

­By th­e end of the '70s, tensions between the U.S. and Soviet Union began to rise once again. A second series of talks ended in 1979 with the signing of the SALT II treaty, which recognized MIRVs and set limits on the number of weapons a country could have and the rate at which technology could move forward. President Jimmy Carter, who originally signed the treaty, pulled out of the agreement in January 1980 when the Soviets invaded Afghanistan, setting the stage for the next difficult decade.

The decade also ended with a scare when the nuclear power plant at Three Mile Island suffered a partial meltdown in 1979. The accident, located near Harrisburg, Penn., caused 140,000 residents to flee the ­area upon hearing news of the first major nuclear power accident. No one was injured or killed during the accident, but the event heightened fears of nuclear power and increased the need for safety regulations.

Alongside the attempt at détente, two more countries joined the nuclear "club" in the '70s. India unexpectedly began testing nuclear technology in 1974 -- an underground test on May 18, known as "Smiling Buddha," wasn't a weapon suitable for warfare, and Indian officials declared the trials "peaceful." The test still received negative international attention as yet another country emerged with nuclear capabilities, and the action prompted Pakistan, India's longtime rival, to respond with their tests soon after.