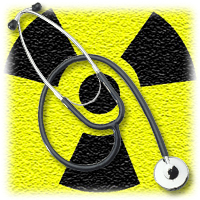 Nuclear materials get used in everything from PET scans to chemotherapy.

In hos­pitals or on TV, you've probably seen patients undergoing radiation therapy for cancer, and doctors ordering PET scans to diagnose patients. These are part of the medical specialty called nuclear medicine. Nuclear medicine uses radioactive substances to image the body and treat disease. It looks at both the physiology (functioning) and the anatomy of the body in establishing diagnosis and treatment.

In this article, we will explain some of the techniques and terms used in nuclear medicine. You'll learn how radiation helps doctors see deeper inside the human body than they ever could.

One problem with the human body is that it is opaque, and looking inside is generally painful. In the past, exploratory surgery was one common way to look inside the body, but today doctors can use a huge array of non-invasive techniques. Some of these techniques include things like X-rays, MRI scanners, CAT scans, ultrasound and so on. Each of these techniques has advantages and disadvantages that make them useful for different conditions and different parts of the body.

Nuclear medicine imaging techniques give doctors another way to look inside the human body. The techniques combine the use of computers, detectors, and radioactive substances. These techniques include:

All of these techniques use different properties of radioactive elements to create an image. See How Radioactivity Works for complete details.

The use of any specific test, or combination of tests, depends upon the patient's symptoms and the disease being diagnosed.

In a PET scan, the patient is injected with a radioactive substance and placed on a flat table that moves in increments through a "donut" shaped housing. This housing contains the circular gamma ray detector array (Figure 2), which has a series of scintillation crystals, each connected to a photomultiplier tube. The crystals convert the gamma rays, emitted from the patient, to photons of light, and the photomultiplier tubes convert and amplify the photons to electrical signals. These electrical signals are then processed by the computer to generate images. The table is then moved, and the process is repeated, resulting in a series of thin slice images of the body over the region of interest (e.g. brain, breast, liver). These thin slice images can be assembled into a three dimensional representation of the patient's body.

PET provides images of blood flow or other biochemical functions, depending upon the type of molecule that is radioactively tagged. For example, PET can show images of glucose metabolism in the brain, or rapid changes in activity in various areas of the body. However, there are few PET centers in the country because they must be located near a particle accelerator device that produces the short-lived radioisotopes used in the technique.

­SPECT is a technique similar to PET. But the radioactive substances used in SPECT (Xenon-133, Technetium-99, Iodine-123) have longer decay times than those used in PET, and emit single instead of double gamma rays. SPECT can provide information about blood flow and the distribution of radioactive substances in the body. Its images have less sensitivity and are less detailed than PET images, but the SPECT technique is less expensive than PET. Also, SPECT centers are more accessible than PET centers because they do not have to be located near a particle accelerator.

Cardiovascular imaging techniques use radioactive substances to chart the flow of blood through the heart and blood vessels. One example of a cardiovascular imaging technique is a stress thallium test, in which the patient is injected with a radioactive thallium compound, exercised on a treadmill, and imaged with a gamma ray camera. After a period of rest, the study is repeated without the exercise. The images before and after exercising are compared to reveal changes in blood flow to the working heart. These techniques are useful in detecting blocked arteries or arterioles in the heart and other tissues.

Bone scanning detects radiation from a radioactive substance (technetium-pp methyldiphosphate) that, when injected into the body, collects in bone tissue, as bone tissue is good at accumulating phosphorus compounds. The substance accumulates in areas of high metabolic activity, and so the image produced shows "bright spots" of high activity and "dark spots" of low activity. Bone scanning is useful for detecting tumors, which generally have high metabolic activity.

­In nuclear medicine imaging tests, injected radioactive substances do not harm the body. The radioisotopes used in nuclear medicine decay quickly, in minutes to hours, have lower radiation levels than a typical X-ray or CT scan, and are eliminated in the urine or bowel movement.

But some cells are severely affected by ionizing radiation -- alpha, beta, gamma and X-rays. Cells multiply at different rates, and the quickly multiplying cells are affected more strongly than standard cells because of two properties:

Quickly multiplying cells have less time for the repair mechanism to detect and fix DNA errors before they divide, so they are more likely to self-destruct when corrupted by nuclear radiation.

Since many forms of cancer are characterized by rapidly dividing cells, they can sometimes be treated with radiation therapy. Typically, radioactive wires or vials are placed near or around the tumor. For deep tumors, or tumors in inoperable places, high-intensity X-rays are focused on the tumor.

The problem with this sort of treatment is that normal cells that happen to reproduce quickly can be affected along with the abnormal cells. Hair cells, cells lining the stomach and intestines, skin cells and blood cells all happen to reproduce quickly, so they are strongly affected by radiation. This helps explain why people undergoing treatment for cancer frequently suffer hair loss and nausea.