How to Stop a Nuclear Meltdown 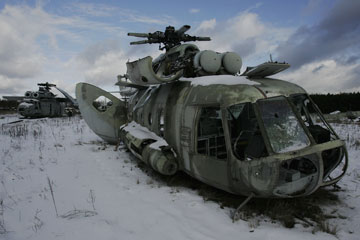 Highly radiated helicopters used to dump concrete and water on the Chernobyl reactor in 1986 lay in a field near the Ukrainian village of Rosoha.
Daniel Berehulak/Getty Images

Again, nuclear meltdowns come down to heat and the vital need for an operating coolant system to keep conditions in check. The Fukushima Daiichi disaster reminds us that this system is critical even if all fission activity has been shut down. The Japanese plant automatically submerged the fuel rods when increased seismic activity occurred, effectively stopping all fission reactions within 10 minutes. But those rods still generated decay heat that required a functional coolant system.

This is also why high-level radioactive waste, such as irradiated or used nuclear reactor fuel, poses such a concern. It takes tens of thousands of years for these materials to decay to safe radioactive levels. During much of this time, they'll require a coolant system or sufficient containment measures. Otherwise, they'll burn through anything you put them in.

Past nuclear power plant designs have proven even more prone to meltdowns, however. At the time of the respective accidents, the Fukushima Daiichi and Three Mile Island power plants used water not only as a coolant but also as a moderator. A moderator decreases the speed of fast neutrons, making them more likely to collide with fissionable fuel components and less likely to collide with nonfissionable fuel components. In other words, a moderator increases the likelihood that fission will occur in the reactor. When the water drains from the core of such a reactor, therefore, fission automatically stops.

Chernobyl, on the other hand, used solid graphite as a moderator. If the coolant drains away, the moderator remains behind. As such, loss of water in a Chernobyl-type reactor can actually increase the rate of fission.

In order to prevent a loss of coolant accident from turning into a meltdown, plant operators have to cool down the reactor's core. This means flushing more coolant through the overheating fuel rods. The newer the fuel rods are, the faster this cooldown will occur.

If a partial meltdown begins to occur, the rods will slump. If unchecked, the slumping rods will then melt and pool at the bottom of the reactor core in a large molten sludge. That radioactive sludge would pose an even greater cooling challenge. Not only is it a single mass (as opposed to several independent rods), one side of it is pressed against the bottom of the reactor core, steadily burning through it via the heat it produces.

In Chernobyl's case, emergency teams pumped in hundreds of tons of water to cool the reactor core. Next, they dumped boron, clay, dolomite, lead and sand on to the burning core by helicopter to put out the fires and limit the radioactive particles rising into the atmosphere. In the months that followed, they encased the ruined plant in a concrete shielding often referred to as a sarcophagus.

Again, nuclear power plants ultimately boil down to heat generation, and their maintenance depends on proper regulation of that heat. If coolant systems fail, conditions can steadily burn out of control.

Explore the links below to learn even more about nuclear power.