What's the oldest thing we've seen through a space telescope? 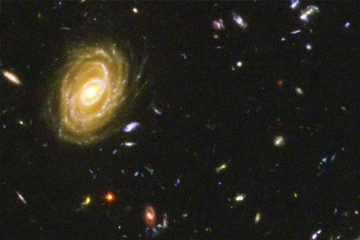 The Hubble Space Telescope was able to peer 13 billion light-years away to find seven galaxies, some born just around 400 million years after the universe's inception.
NASA/Getty Images

Before we get into the meat of the question, let's start off by explaining why we're asking about the oldest thing ever spotted through a telescope. The set-up sounds suspiciously like an astronomy-themed vaudeville routine or something: "I looked through the Hubble Telescope and saw my mother-in-law waving!"

"Hey," you might be thinking, "don't you mean the farthest thing you've seen through a space telescope? How can we see old stuff through a telescope?"

Turns out, the farthest thing you can see in your telescope is the oldest thing as well. (That is, if "you" are an astronomer and "your telescope" is something like the Hubble.) While light speed is the fastest thing in the universe that we know of, it still takes time to travel. When we catch a glimpse of our sun, for instance, we're actually seeing what it looked like eight minutes before, as its rays take eight minutes to reach us. Much, much farther distant stars, planets and galaxies are no different; if a star is 20 light-years away, we're looking at it as it shone 20 years ago. Looking at a galaxy 100 million light-years away means we're seeing it not as it looks right this second, but as it looked when dinosaurs were stomping around Earth.

Try 13 billion. Which really makes you feel the need to tip your hat to telescope technology, no? The Hubble Space Telescope was able to peer 13 billion light-years away to find seven galaxies, some born just around 400 million years after the universe's inception [source: NASA]. Hubble stared at a certain spot (the Ultra Deep Field) for 100 hours, peering at the sky in infrared in order to catch objects the farthest away [source: Plait].

What it found was galaxies ranging from 13 billion to 13.3 billion light-years away. While the numbers aren't confirmed, the initial results are still pretty stunning. Also note that we're already assuming we can top them when the James Webb Space Telescope launches in 2018: The JWST has infrared capabilities that can peer even farther than Hubble and give us a more accurate picture. Even cooler, the JWST should be able to show us light sources that originated just 200 million years after the Big Bang [source: Masetti].