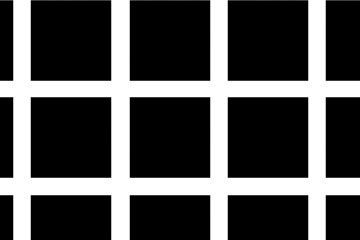 The Hermann Grid was first reported by Ludimar Hermann in 1870 and concerned the phenomenon of gray blobs appearing at the intersection of black and white squares.
Wikimedia Commons

Have a look at this picture. What do you see? A grid of squares? Great. Now look again at the white space in the "street crossings." Although this image, known as the Hermann Grid, is really just a black and white grid of squares, it appears as though there's something more – little grey discs, or blobs of darkness, in the intersections of the white lines. This grid is one of the most classic examples of an optical illusion, where your mind is being tricked into seeing something that's not there. You see the dark blobs in the white spaces, but when you stare right at the spot where the blob should be, it disappears because, in fact, it was never there to begin with.

This is just one of countless examples of the eyes playing tricks on the brain. Illusions deceive us for various reasons. Adjacent objects can influence how you see things. Messing with perspective can change your perception of an object. Sometimes illusions work because of shortcomings in the normal anatomy of our eyes. But let's not just blame those "windows to the soul." The brain, too, is guilty of causing us to be fooled by what we see. It can sometimes be too quick to make assumptions about how the world should be instead of how the world actually is, causing us to see things incorrectly.

You've probably seen and been duped by dozens of examples of optical illusions, and you're not alone. Rewind back in history to the ancient Greeks. Even Aristotle referenced how easily the mind can be tricked by what it sees. He noted that when you looked at a waterfall and then shifted your gaze to static rocks nearby, it appeared as though the rocks were moving in the opposite direction than the waterfall.

Even nature is in on this trickery. We don't fully understand what happens in our brains when we see different optical illusions, but since the 19th century, scientists and artists have been learning more about this disconnect between reality and perception and what it tells us about the brain. 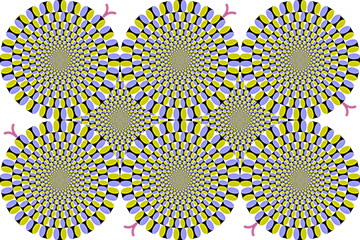 "Rotating snakes" is an optical illusion developed by Professor Akiyoshi Kitaoka in 2003 where bands of color ("snakes") appear to be in perpetual motion even though the image is static.
Wikimedia Commons

Our perception of optical illusions is controlled by our brains. For example, the brain can easily flip between two different views of an object to turn something that's two-dimensional on a piece of paper into an object that we perceive as being 3-D. But how?

It's complicated. The 1981 Nobel Prize in Physiology or Medicine was awarded, in part, to David Hubel and Torsten Wiesel for their discoveries in how the brain interprets the coded communications sent to it from the eyes. (That year, the award was given to multiple winners.) They learned that there is a stepwise process in how the brain analyzes what the eye sees. Each nerve cell or neuron in the brain is responsible for a specific detail in the pattern of the retinal image. But even with Hubel and Wiesel's discoveries and our knowledge of the different parts of the brain that deal with color, form, motion and texture, scientists still don't really have a sense for how all the messages come together to produce our overall perception of an object.

Using MRI scans, scientists can analyze what is happening in our brains when we look at illusions. They've learned that neurons can actually compete with one another to see light and dark spots. The winning neurons influence the message your brain gets and, therefore, what you end up perceiving [source: Hogenboom].

One theory that researchers have put forth is that some illusions cause us to be fooled because they capitalize on the way the brain constantly tries to make predictions of what will happen next in order to compensate for the small lag time between when an event happens and our ability to perceive it. Sometimes the prediction doesn't match the reality that the illusion depicts.

Another theory tries to explain "apparent motion" illusions, such as the so-called snake illusion where the objects appear to be moving on the page. Here, scientists suggest that the small — almost imperceptible — rapid movements our eyes make (called saccades) that normally get smoothed out by the brain to give us a single picture are responsible for us perceiving motion when there is none. But others say that the illusion instead works because it's sending so many pieces of information to our retina at once, and the simultaneous messages to our visual cortex cause confusion.

Obviously, not all illusions work the same way, and some theories don't always hold up when slight modifications are made to the illusions. So, in short, we're still confused about why our brains are so confused!

Now You See It, Now You Don't 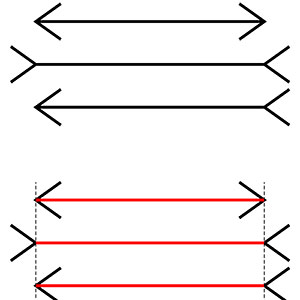 In the Müller-Lyer illusion, the lines appear to be of differing lengths (because of the direction of the arrows), even though they are all the same.
Wikimedia Commons

Optical illusions are everywhere. Aristotle noticed optical illusions in waterfalls. Indiana Jones saw one in the rocks as he made his leap of faith across the giant crevasse in the "Indiana Jones and the Last Crusade". And we see them everywhere, from M.C. Escher drawings to trending internet memes (was that dress blue or gold?).

In fact, once we've seen the "trick" in an illusion, it's nearly impossible to un-see it. We simply can't transport our minds back to a time when we didn't know the thing we just learned. Once the prior knowledge is available, our brain quickly accesses it and puts it together with the visual cues that you have gotten from actually looking at the illusion. The "can't un-see" feeling that many people have when looking at illusions is a perfect example of the brain doing more than just translating what our eyes see.

And optical illusions are not just a function of our eyes and brains; our perception may also largely be influenced by cultural factors. While the biological basis for how optical illusions might work is universal across humans, when some illusions are shown to people in different cultures, not everyone saw the same thing or missed the same visual cues [sources: Schultz, Alter].

Take for instance, the Müller-Lyer illusion. In a study, most European South Africans thought the lines were of different lengths but bushmen in some South African tribes correctly noted they were the same lengths. Scientists have theorized that people in western societies are used to seeing straight lines and geometric shapes, and people with other cultural experiences aren't exposed to the same geometric configurations, so their brains don't leap to the same conclusions when exposed to illusions that are built upon geometric trickery [source: Schultz].

The "devil's tuning fork" is an illusion where a three-pronged instrument at one end morphs into two prongs at the other.
Wikimedia Commons

However, when test computers designed to mimic the brain's activities were given the same illusion, they are also duped. So the cultural influence on perception of illusions, if it actually exists, is still a big question [source: Schultz].

Most of the optical illusions we are used to seeing, such as the "devil's tuning fork", have been around for a long time. New illusions are largely riffs off the old classics. Even the Op-Art movement of the 1960s and 1970s, which showcased a whole new series of illusions as fine art, used classic notions like the visual influence of adjacent objects, apparent motion, and twists on perspective that many of our old favorite illusions use. People today, however, are still coming up with new takes on optical illusions. Vision researchers hold an annual contest to find the best new illusions. Not only is the contest fun, but it serves to help them study more about how the brain perceives these images. 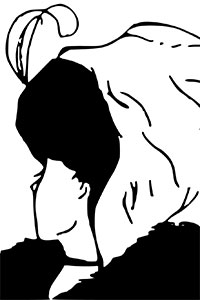 Psychologist Edwin Boring introduced the painting of "My Wife and My Mother-in-Law" where the figure seems to morph from young lady to old woman, to the public in 1930. Over time, the "Boring figure" was simplified to the version seen here.
Wikimedia Commons

Optical illusions can be fun games. It's an old lady! It's a young woman! Old lady! Young woman! Both! Neither! But they have been used for medical treatment purposes. And it's also been postulated that they may have played a role in causing one of the greatest disasters in recent history.

Phantom limb pain is the sensation of pain in a body part that has been amputated and no longer exists. While doctors have tried to treat this phantom pain with medicine, physical therapy and even surgery, some of the most successful treatments have been with what is essentially an optical illusion [source: Kim]. For this brain trickery to work, doctors have patients place their existing limb – for example, their right arm – on the reflecting side of a mirror, and their brain is fooled into believing the illusion that the reflection of their existing arm is actually their amputated left arm. While the patient understands this not to be true, the brain is tricked into thinking the arm has returned. The pain often disappears after multiple sessions playing with this mirror treatment [source: NPR].

As much as this optical illusion has helped amputees, illusions may also have been responsible for causing some harm to folks as well. Historians have postulated that the sinking of the Titanic may have actually been the result of an optical illusion at play. The atmospheric conditions on the evening that the ship sank were ripe for super-refraction or the extreme bending of light. This light bending may have caused the iceberg with which the ship collided to visually disappear from sight. Not only that, but after the collision, the Titanicitself may have the victim of this light-bending, making it hidden from the sight of the nearby freighter, the Californian, which should have been able to come to its rescue [source: Smithsonian.com].

Researching for this article just confirmed to me that I could stare at an M.C. Escher drawing for hours and still never be able to figure it out. I guess that's the point!

How Crack Cocaine Works
Antarctica's Spooky Cosmic Rays Might Shatter Physics As We Know It
What Makes a Scent Soothing?