The Case for Subletting Space 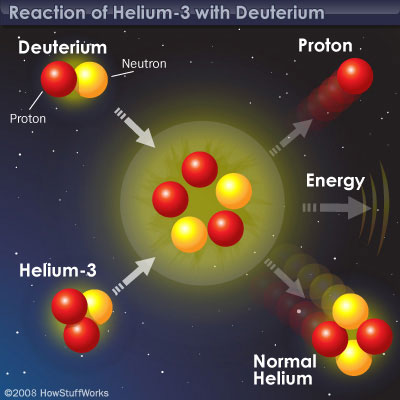 You're looking at one major commercial reason why people want to set up camp on the moon: helium-3.

For more than a century, writers have looked to the moon as the future home of societies both farcical and frightful but always inevitable. A mere quarter of a million miles (384,400 kilometers) away, like a stepping-stone across a wide river of black, it waits for us still.

One day, humans will exploit the resources of outer space, "drill, baby, drill"-ing their way through the solar system before trekking to far-off worlds. Scientists have already found hints of goodies scattered throughout our solar neighborhood; it's simply a matter of going after them.

The moon, for example, is a land flowing with milk and honey -- if by "milk" and "honey" you mean oxygen, water and prospective sources of fuel and construction materials. Better still, it could be brimming over with helium-3, an isotope prized for its potential uses in nuclear fusion. Russia plans to mine the moon's helium-3, and China, India, Japan and Germany might have similar designs on the radioisotope [sources: Lasker; Osborn; Williams].

Over time, prospecting for a cosmic Comstock Lode could turn from luxury to necessity. Taking space exploration to the next level might mean mining other worlds for supplies, materials and go-juice. Back home, we might come to rely on an ever-expanding hinterland to support our bustling billions.

For that to pan out, however, experts agree that we must make way for private-sector prospectors. As the world tilts ever more toward privatization, commercialization, deregulation and globalization, and as support for purely national space programs peters out, it becomes clear that the solar empire will be built on the greenbacks of private companies -- most likely through the infrastructure, economic incentives and regulatory framework provided by public-private partnerships. Indeed, national governments might well provide the initial market for space products [source: Jakhu and Buzdugan].

Before corporations climb aboard the space train, they must be convinced that their investment will return a sound profit without delay, which means that a market must already exist, costs and risks must fall within acceptable limits and, most important of all, a legal framework must be in place to safeguard their investment.

In other words, before Century 22 can start staking out lunar housing developments or AstroMining Ltd. can begin boring asteroids into Swiss cheese, nations must establish a system for assigning and managing mineral rights, spectrum rights, rights-of-way, orbital slots, intellectual property and title deeds -- ideally, in cooperation with the international community.

Current international space law throws roadblocks in the path to such private progress, but they're nothing that an international consortium of shrewd tycoons (and a few truckloads of lawyers) couldn't bypass or bulldoze under.

Scholars have already ginned up several theories on how to bridge the gap, drawing upon analogs in similarly fuzzy areas of international law, such as those governing patents, the continental shelves, civil law, salvage and the sea. One extreme solution proposes that a space colony break off and form a new nation [source: Jakhu and Buzdugan].

Barring some massive shift in the political and economic fortunes back on Earth, private space development will happen. In the end, the law will evolve to accommodate it, opening the final frontier to mining and settlement, hopefully in the continued spirit of equitability and international cooperation.