Browse the article How is oxygen made aboard a spacecraft? 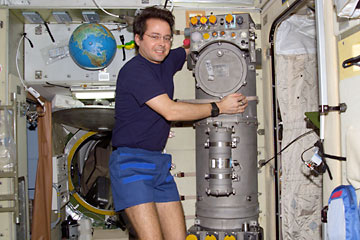 On Earth, we have a constant supply of fresh air. We breathe in oxygen and breathe out carbon dioxide. These gases get recycled by plants through the process of photosynthesis. The plants take in carbon dioxide and release oxygen. It's a wonderful cycle on a vast scale. But what happens in the tiny, confined cabins of spacecraft, like the space shuttle or space stations?

Most spacecraft carry their own supply of oxygen with them and may have one backup system. However, the missions of these spacecraft last a short time, on the order of days to two weeks. In contrast, the International Space Station (ISS) was designed for long-term spaceflight and has been in orbit since 1998. So how is oxygen made aboard the ISS? It's handled in one of three ways, using oxygen generators, pressurized oxygen tanks or solid fuel oxygen generators (also called oxygen candles).

The primary method is accomplished by the oxygen generators: the Russian-made Elektron and the U.S. Environmental Control and Life Support System (ECLSS). The Elektron is located in the service module (Zvezda) and the ECLSS is located in the Destiny laboratory module. These devices make oxygen from water by a process called electrolysis, during which an electric current passes through water from one positively-charged electrode called an anode to another negatively-charged electrode called a cathode. There's a small concentration of salt in the water to conduct electricity because water itself is a poor electrical conductor. In the process, water gets split into hydrogen gas and oxygen gas. Here's how the chemistry of the process works:

The electricity is generated by the station's solar panels and supplied to the oxygen generators through the station's power grid. The water gets delivered to the station from Earth by Progress supply ships and the space shuttle. Water also gets reclaimed by condensers that remove water vapor from the cabin air (astronauts exhale water vapor). Finally, water can be recycled from the astronauts' urine by the ECLSS unit. The hydrogen gas made in the electrolysis process gets vented into space and the oxygen gas is circulated into the cabin air.

Now let's look at the other ways by which the ISS makes oxygen.

Creating Oxygen Aboard the ISS

In the second method, oxygen is not made, but rather delivered to the ISS from Earth. When Progress supply ships, European automated transfer vehicles, or the U.S. space shuttle dock at the station, they pump oxygen into pressurized tanks at the airlock nodes. They also pump nitrogen gas into other pressurized tanks at those airlocks. The station's atmospheric controls mix the gases in the correct proportions to Earth's atmosphere and circulate the mixture through the cabin.

The third method is a backup system that makes oxygen through chemical reactions. The system is called the solid fuel oxygen generator (SFOG) and is located in the station's service module (Zvezda). The SFOG, which is also called oxygen candles or chlorate candles, has canisters that contain a mixture of powdered sodium chlorate (NaClO3) and iron (Fe) powder. When the SFOG is ignited, the iron "burns" at 1112 degrees F (600 degrees C), which supplies the heat energy required for the reaction. The sodium chlorate breaks down into sodium chloride (table salt- NaCl) and oxygen gas (O2). Some of the oxygen combines with iron to form iron oxide (FeO):

In future space stations or space colonies, NASA scientists hope to create oxygen and eliminate carbon dioxide naturally by growing plants. The plants would supply breathable air and be a food source for the astronauts. One problem that must be solved, though, is how to grow large numbers of plants in small spaces -- living space aboard a space station is limited.