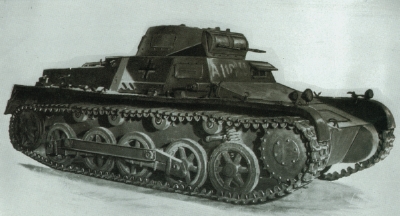 The German Panzerkampfwagen I light tank was originally intended as a training tank. It was armed only with two machine guns.
©2007 Publications International, Ltd.

What had been referred to in all official documents as "agricultural tractors" to disguise their true nature were, in fact, military tanks called Panzerkampfwagen.

But it was not until 1935 that the new Nazi government, which had approved their acquisition, was ready to defy the Versailles Treaty of 1919 (which limited the German armed forces to 100,000 men and no tanks or fighter aircraft) and admit the true nature of the tanks.

In the meantime, these two new tanks of the arrogant Third Reich were intended for use as training vehicles for the new armored division concept developed by General Heinz Guderian, the Chief of Staff to the Inspectorate of Motorized Troops.

The two new tanks, designated Panzerkampfwagen (Pz.Kpfw) I and II (military designations, SdKfz 101 and SdKfz 121), were drafted as war weapons.

They formed the armored force that broke the Polish Army in three weeks during September 1939. Nine months later, they were still the armored core of the blitzkrieg that smashed the mightiest fighting force in Europe, the French Army.

Panzerkampfwagen I specifications were issued as early as 1932. It was designated as an agricultural tractor to disguise its true purpose.
©2007 Publications International, Ltd.

In the early days of the Third Reich, Guderian correctly perceived that Hitler was hell-bent on unleashing war on the European continent to avenge the German defeat in 1918 and the dishonorable peace (as perceived by Germany) that had been imposed.

Influenced by the writings of Charles de Gaulle, France's preeminent military tactician who was ignored by the French military establishment, and England's Basil Liddell Hart, Guderian strove all through the 1930s to build the new Panzer divisions -- a combination of tanks, infantry in motor vehicles, motor-drawn artillery, scouting troops on motorcycles, and necessary support units.

The first of the new Panzer divisions was formed in 1935, and their tanks were the Pz.Kpfw I and II.

The Pz.Kpfw I was designed to a general specification set by the new Nazi government. They were produced by industrial giant Krupp Werke, which won a design runoff. The chassis was based on the British Carden-Loyd tankette. A 57-horsepower Krupp gasoline engine drove the front sprockets.

The tank weighed not quite six tons in the original version. It mounted a hand-cranked turret in which the commander stood -- the driver sat below in the hull -- and two 7.92mm machine guns were mounted for the commander's use. Armor plating between .25 and .5 inch thick protected the crew against small arms fire.

Capable of traveling up to 125 miles at a top speed of 23 miles per hour, the Pz.Kpfw I could cross vertical obstacles more than 14 inches high and span four-foot trenches.

Production began in 1934, and trials that year showed that the Pz.Kpfw I was badly underpowered. A new, more powerful Maybach 100-horsepower engine was installed, which required that the chassis be lengthened by 17 inches. This in turn required a fifth road, or bogie, wheel, which led to the development of the Panzerkampfwagen II.

For more on the Panzerkampfwagen II, continue to the next page.