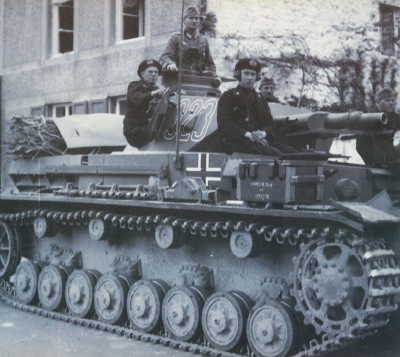 The Panzerkampfwagen IV Ausf F, or F model, was armed with a short-barrel 75mm gun (combat experience in France highlighted the shortcomings of the original 50mm), was driven by a 250-horsepower Maybach engine (later up-rated to 300 horsepower), and had a top speed of 26 miles per hour.

Armor plate on the Pz.Kpfw IV was very thin -- varying from .75 inch to a little more than 1 inch on the turret and hull front. In upgrade programs appliqué armor brought total protection up to 2.3 inches in later models. The interior layout was the same as for the Pz.Kpfw III.

The Pz.Kpfw IV served on every front and was heavily engaged against Soviet tanks. Until the T-34 Medium Tank and the KV-1 entered Soviet service, the Pz.Kpfw IV was the boss of the battlefield.

This Panzerkampfwagen IV Ausf H has been fitted with side plates surrounding the turret on three sides, as well as on either side of the hull.
©2007 Publications International, Ltd.

When it became apparent that the Pz.Kpfw IV was the only Nazi German tank that could be up-gunned to meet the Soviet KV-Is and T-34s as equals, Hitler ordered priority production. A new gun, the KwK 40 75mm L/48, and a larger turret were mounted on the Ausf G model in 1943.

With this gun, the Pz.Kpfw IV proved the equal of the Soviet T-34 and KV-1. It was also very effective against the range of British tanks and the American M-4 Sherman Medium Tank. It operated successfully in Russia, Western Europe, the Balkans, North Africa, and Italy.

See the next page to find specifications for Panzerkampfwagens III and IV.