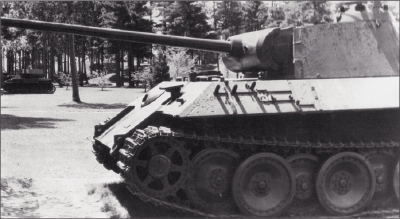 Many tank experts believe the Panzerkampfwagen V Panther had the finest tank design of World War II, in spite of its lack of agility. More than 5,500 were built before the end of World War II.

Following the fall of Kiev in September 1941, an offensive in the direction of Orel was begun by the II Panzer Army on September 30, 1941. The 4th Panzer Division was part of the II Panzer Army, and on October 6 it was pushing hard on the Russian town of Mzensk when it was attacked on its flank and badly shot up.

The Soviet T-34 Medium Tank had made its first appearance in the war. In his diary German General Heinz Guderian noted, "This was the first occasion on which the apparent superiority of the Russian T-34 to our tanks became plainly apparent . . . the rapid advance on Tula which we had planned had therefore to be abandoned for the moment."

The appearance of the T-34 galvanized the General Staff and Nazi German military planners as few other incidents had done.

The Chancellery granted almost immediate priority, and by January 1942 detailed specifications had been drawn up for a new medium tank armed with a heavy gun, yet fast enough to deal with the new Soviet T-34, as well as the KV-1 heavy tank, which had also made an appearance.

By April, designs were finalized and the first production tanks appeared.

Dubbed the Panzerkampfwagen V Panther (military designation, SdKfz 171), its hull construction was little different from the Panzerkampfwagen IV, except in size. It was given a well-sloped turret and massive mantlet (armor surrounding the barrel of the main gun where it leaves the turret) through which the long-barrel 75mm gun protruded.

The new tank was powered by a Maybach 700-horsepower gasoline engine and had a range of 110 miles. Frontal armor was nearly 5 inches thick.

The long gun fired an armor-piercing shell at a velocity of 3,068 feet per second, and it could penetrate 4.75 inches of armor plate sloped 30° from a distance of 1,094 yards.

The Panther could knock out any tank in the Allied inventory until almost the end of the war, including the Soviet T-34, KV-1, and JS-1 tanks.

To learn about modifications to the Panzerkampfwagen V Panther, continue on to the next page. 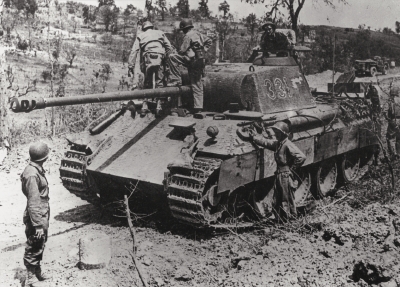 U.S. Army troops examine a Panzerkampfwagen V Panther that was knocked out of action in Italy.
©2007 Publications International, Ltd.

Despite its disastrous debut at Kursk in July 1943, the Panzerkampfwagen V Panther soon became a feared and respected machine. In the beginning, the Panther had the usual teething troubles expected of a complicated weapon rushed into production without proper testing.

The Ausf A model was equipped with a machine gun mounted on the turret in a ball mounting, in addition to the one mounted in the hull. A redesigned road wheel was installed, and more protection was added to the turret.

Extra cooling fans were added to the engine as were improved bearings to help the chassis bear the tank's weight of nearly 50 tons.

In 1944, when the need for tanks was critical, steps were taken to simplify the Panzerkampfwagen V Panther's manufacture.

Armor plating on its vulnerable sides was increased. The driver's hatch was eliminated, and the driver was given a 360° periscope instead.

Toward the end of the war, an infrared searchlight was added, and Panther crews successfully engaged enemy tanks at night out to 500 yards.

The Panzerkampfwagen V Panther's massive frontal armor showed to best advantage in a static defensive position or in areas where there was little maneuvering room.

Panthers of the 47th Panzer Corps fought a largely defensive battle among the hedgerows of Normandy to prevent a breakout. They bolstered Nazi German infantry forces and held up the Allied advance until they were finally defeated by superior Allied air power and tank numbers.

The Panzerkampfwagen V Panther is considered by many tank experts to have been the finest tank design of the war. Its only drawback was a lack of agility.

It became standard practice in Allied armies not to engage the Panther in a frontal attack whenever it could be avoided. Instead, tank commanders were instructed to flank the Panther and try to take it from the side or rear.

The rule of thumb in the United States Army was that five M-4 Shermans were required to defeat one Panther.

The Panzerkampfwagen V Panther was a complex tank to manufacture, and it required far too much of Nazi Germany's dwindling resources. Nevertheless, 5,508 Panthers were built before the Third Reich collapsed in May 1945.

Find Panzerkampfwagen V Panther specifications on to the next page. 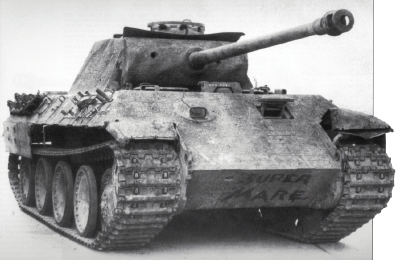 The Panzerkampfwagen V Panther went into full production in January 1943. By May of that year, some 324 Panthers were in service.
©2007 Publications International, Ltd.

Why a Draft Would Weaken the U.S. Military
How to Become an Army Interpreter or Translator
How NCO Professional Development Ribbons Work