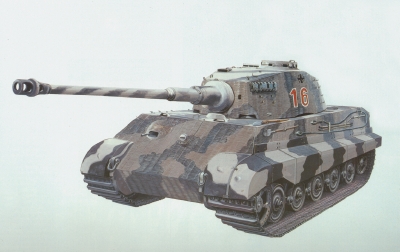 The Panzerkampfwagen VI Tiger II was armed with an 88mm gun, had armor nearly 6 inches thick on the glacis, and could reach a speed of about 24 mph.
©2007 Publications International, Ltd.

The Panzerkampfwagen VI Tiger II was heavy and strong, but it had its flaws.

Cross-country, the King Tiger could move at a maximum speed of 11 miles per hour -- if the surface was dry and hard. It could not cross most bridges encountered in western or eastern Europe and so had to ford streams.

Its rated depth was five feet, three inches, and it could climb grades up to 35°, but only if the ground was firm. Mud was the King Tiger's enemy. Even sitting stationary on unpaved ground, it was likely to sink in if the soil was damp.

The Panzerkampfwagen VI Tiger II served best in a defensive role or in creating breakthroughs where its powerful gun could be brought into play to outrange Allied tanks and antitank weaponry.

The King Tiger's commander strove always to select a position with a field of fire that would force enemy tanks to approach from the front. The Panzerkampfwagen VI Tiger II was vulnerable from the sides and rear because the thinner armor in those areas could be breached by Allied tank guns and antitank weapons.

Nazi Germany built 485 King Tiger heavy tanks in only one model. Like the Tiger I tanks, they were used in Panzer regiments or in independent battalions. The Panzerkampfwagen VI Tiger II played a relatively small role in the Ardennes Offensive of December 1944 because of its lack of agility.

Panthers and Panzerkampfwagen IVs were the main tanks in the 1st SS Panzer Division that spearheaded the Nazi German drive toward the English Channel in an attempt to split Allied forces.

The main variation of the Panzerkampfwagen VI Tiger II was the Jagdtiger (military designation, SdKfz 186) tank destroyer. Instead of a revolving turret, the Jagdtiger had a fixed superstructure in which was mounted a PaK 80 128mm 55-caliber gun.

It could outrange any Allied tank gun and penetrate any Allied armor. It also had a machine gun mounted in the hull and a grenade launcher to use against infantry trying to approach on toot.

The Jagdtiger was powered by the same Maybach 600-horsepower engine and was as heavily armored as the Tiger II. Its combat weight was 70.6 tons, which reduced its road speed to a maximum of nine miles per hour.

Of course, the Jagdtiger only be moved over the hardest, driest roads. It was used primarily in Waffen SS tank destroyer battalions.

While they were available for the Ardennes Offensive of December 1944, they did not see much action until Allied forces began the push into Germany proper. The Jagdtiger was the heaviest tank ever to see service in World War II.