For physicists who want to study the subatomic particles that are the basic building blocks of the universe and learn about how they interact, a particle accelerator — a massive device that speeds up and energizes particles and causes them to collide — is a really important tool. Imagine an accelerator as a microscope the size of a mountain, capable of studying the smallest things in existence.

"Accelerators are the ultimate microscopes," Mark J. Hogan, a physicist at the SLAC National Accelerator Laboratory in Menlo Park, California, explains in an email. "Their resolving power is proportional to the energy of the particle beams. Current machines that operate at the energy frontier are monuments to human engineering. These machines are tens of kilometers in extent yet control their beams to fractions of the diameter of a human hair."

That's why with an accelerator, bigger has always been better. If you're even a casual science buff, you've probably heard of the big daddy accelerator of them all, the Large Hadron Collider (LHC) at CERN, Europe's particle physics laboratory near Geneva, Switzerland. Possibly the most complex machine ever created, the LHC has a massive, 17-mile (27.35-kilometer) track that it uses to accelerate particles. Scientists used the LHC in 2012 to observe the Higgs Boson, a particle that helps to explain why other particles have mass and why things hold together.

One problem with really big particle accelerators, though, is that they're incredibly expensive and consume massive amounts of electricity. The LHC, for example, cost $4.1 billion just to build. So what physicists would really love to have is a way of getting the job done that's not quite as huge and costly.

That's why there's been so much excitement about the news that CERN researchers have successfully tested a new way of accelerating electrons to high energies through proton-driven plasma wakefield acceleration. The method involves using intense clumps of protons to generate waves in plasma, a soup of ionized atoms. The electrons then ride the waves to accelerate, as if they were subatomic-scale surfers.

In a test run with the Advanced Wakefield Experiment (AWAKE) in May, CERN researchers managed to use the method to accelerate electrons to energies of 2 gigaelectronvolts (GeV) over a distance of 10 meters (32.8 feet).

Here's a video in which Edda Gschwendtner, CERN AWAKE's project leader, explains the concept of accelerators, and why a protein-driven plasma wakefield accelerator is such a major breakthrough:

Other researchers hailed the CERN achievement. "This technique could let the facilities at CERN have a new compact way to produce high energy electrons that could be collided with fixed targets or proton beams to make a new tool for particle physicists to understand fundamental particles and the forces that govern their interactions," Hogan says.

"This result is important for the future of high energy physics in that it may open a path to a compact 1 TeV electron accelerator based on plasma wakefield acceleration," explains James Rosenzweig, a professor of accelerator and beam dynamics at UCLA, and director of the university's Particle Beam Physics Lab. "From the viewpoint of introducing physical principles, this experiment is a first — it introduces plasma wakefields excited by proton beams.

"The key advantage found in plasma accelerators is found in the large accelerating electric fields which can be supported — up to 1,000 times larger than in conventional accelerators. The use of protons in principle allows beams with much larger available total energy for acceleration," Rosenzweig says via email.

Hogan's team at SLAC has developed a different plasma wakefield acceleration method, which relies upon bunches of electrons inserted into the plasma to create waves on which other electrons can ride. But whichever method is used, plasma offers a way to get past the constraints of conventional accelerators.

"With all their precision and success, though, these machines are approaching the limits of size and cost that society will afford," Hogan says. "For machines that accelerate electrons, the size is related to the maximum rate that we can add energy to the particles. Using conventional technologies with metal structures, we cannot increase this rate further as the fields become so large that the materials break down under the extreme forces. A plasma, an ionized gas, is already broken down and can support much larger fields and when manipulated properly, can add energy to particle beams at a much larger rate and thus in principle get to the energy frontier in a smaller footprint.

"Many groups have shown we can use plasmas to make energetic bunches of electrons," says Hogan. "Much of the next generation of research is geared towards demonstrating that we can do this while simultaneously making beams with quality and stability that is equivalent to conventional technologies. Other research issues are thinking of how to string many consecutive plasma cells together consecutively to reach very high energies. Additional challenges are understanding how to accelerate positrons, the antimatter equivalent to electrons in a plasma. Looking ahead, many groups, including my colleagues at SLAC hope to develop high energy beams with superior qualities that will open the door to new scientific instruments in the next decade and beyond."

An AWAKE spokesman told Science magazine that the researchers hope to develop the technology over the next five years, to the point where it could be used for particle physics research.

Now That's Interesting
As the European Union's Horizon magazine details, scientists also have envisioned building a conventional particle accelerator that's three times the size of the LHC. The device would have the ability to smash particles together by energizing them with the equivalent 10 million lightning strikes.

These Folks Retired in their 30s and 40s: Can You Do It Too? 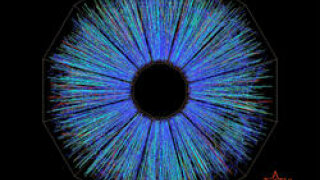 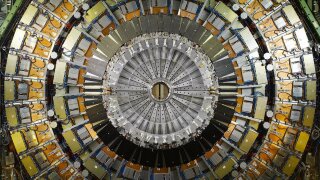 Large Hadron Having a Smashing Good Time in 2016 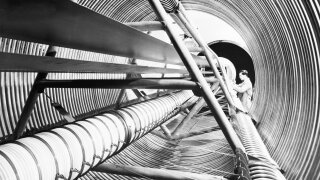