Peering Into the Heart of the James Webb Space Telescope

For thousands of years our species has gazed at the stars. First we built myths to explain the movements of the heavens. Later, we built technology to examine these events: things like astrolabes, telescopes and the Antikythera mechanism.

And here's the thing: We're still building. In just a few years, the James Webb Space Telescope (JWST) will fundamentally change our understanding of the universe. With a massive, 18-section mirror that's now complete and measuring 21.3 feet (6.5 meters) in diameter, the JWST will allow our species to peer through time, all the way back to the formation of some of the first stars and galaxies.

A robotic arm does the honors, fitting the last of the telescope's 18 mirrors into place on the telescope structure.
NASA/Chris Gunn

This telescope is the successor to Hubble, detecting infrared signals from across the observable universe.

Sounds cool, sure. But how does it work?

It all depends on what's often called the heart of the James Webb: the ISIM, or integrated science instrument module. We traveled to NASA's Goddard Space Flight Center to get a close-up of ISIM, speak with some of the space agency's top scientists and explore the future missions of the JWST.

In the above video, we explore the science behind the JWST and the rigorous testing regimen required to ensure these incredibly sensitive instruments survive a trip to space. Check it out.

Chrysler Builds the First Plug-in Hybrid Minivan (You Know You Want It.) 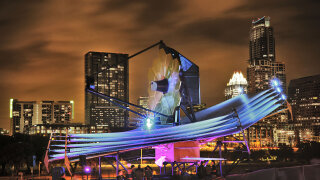 Our Closest Look Ever at Pluto’s Weird, Beautiful Surface