Does a planet need continents to support life? 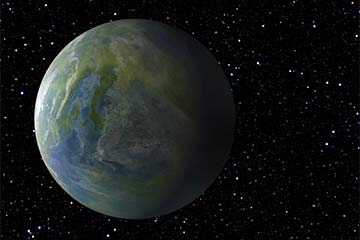 Becoming a planet that will support life is a complicated matter, one that scientists haven’t quite unraveled.
MihailUlianikov/iStock/Thinkstock

Just in case you were feeling significant today, consider this: There could be 40 billion planets -- all of them the size of Earth -- orbiting sun-like stars in the Milky Way galaxy. And that doesn't even include the other planetary possibilities that surely exist outside our own interstellar neck of the woods.

Scientists made the sizable discovery in 2013 as they studied data garnered from NASA's Kepler spacecraft. Of these newfound planets, one in particular -- known as Kepler-186f -- is an Earth-size planet orbiting around a red dwarf star about 490 light years from Earth. It appears to be a distant cousin of our own home planet; it has a rocky surface, signs of liquid water and an atmosphere (although scientists are still unsure what that atmosphere comprises). Still, the question remains: Could it support life? It seems to have all the right ingredients, including landmasses [sources: Overbye, Kramer].

Turns out, landmasses and the sustainability of life go hand-in-hand. Take the earth, for example. Some scientists believe Earth's seven continents are the result of the life forms that have evolved on its surface. Without this life, Earth may have been doomed to a watery existence, its surface covered entirely by liquid. This theory that land and life have a symbiotic, planetary relationship could indicate that continents spotted on distant planets may be home to living things, too.

While it's possible that elemental life forms could exist on a planet that has a surface composed only of water, researchers believe a planet needs continents to support larger life forms and to perpetuate an atmosphere that, in turn, will allow these larger life forms to thrive. In short, no continents, no life.

Here's why: Plants that grow on a continent's soil produce oxygen, which then enters the atmosphere. This photosynthesis spawns a productive, efficient system in which a large energy source is available to other life forms. These land-based life forms emit carbon dioxide and methane, which help create the earth's climate. To further solidify the link between land and life, researchers point to the oldest signs of life -- which just happened to appear 3.5 billion years ago, right about the same time the continents were developing.

Becoming a planet that will support life is a complicated matter, one scientists haven't quite unraveled. It's a particular mix of soil, water, atmosphere and, quite probably, yet-to-be-discovered factors. One thing that stands out, however, is that continents are part of the equation needed to support life. And Earth, happily, has seven of them [source: Choi].