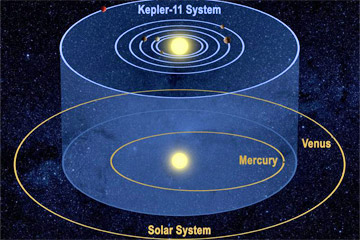 An artist's take on the Kepler-11 planetary system and our solar system from a tilted perspective. That perspective helps to show that the orbits of each lie on similar planes.
Image courtesy NASA

In March 2010, researchers announced another milestone: a Jupiter-like planet 1,500 light-years from Earth that was relatively cool and that could be studied in detail. Because the COROT satellite discovered it, it was dubbed COROT-9b. Previous work had already found other cool planets, but COROT-9b was the first that transits between its star and Earth. This meant that scientists could study both its size (from the amount it diminished the light of its parent star) and its atmospheric composition (from the way starlight interacted with it as it passed through its atmosphere) [source: ESA].

COROT-9b lies in its star's habitable zone but, because it's a gaseous world, scientists don't consider it likely to be hospitable to life. Its atmosphere might contain water, however, and such a large planet could also sport a habitable moon [source: ESA].

In late September 2010, a group of astronomers in the United States using spectroscopic data from ground-based instruments announced the discovery of a potentially hospitable planet, Gliese 581g, orbiting the star Gliese 581 just 20 light-years away. The announcement sparked widespread excitement because the planet was found so close to Earth, and only 15 years after astronomers identified the first exoplanets. Soon after the announcement, however, scientific groups began raising doubts about the discovery [source: Wall].

Researchers had already found evidence for other planets in the same red dwarf system, two of which (Gliese 581d and Gliese 581e) orbited on the fringes of the habitable zone. So, which of Gliese 581's children would take the crown as the best candidate yet found for supporting life? The issue was too complicated to resolve easily. Detecting planets spectroscopically requires toning down the noise inherent in observational data and then determining which assumptions to use. The same data can argue for different numbers of planets depending on whether you assume eccentric (highly elliptical) orbits or nearly circular ones. Scientists had yet to reach a consensus at the time this article was written.

January 2011 saw the Kepler mission confirm finding its first rocky planet, estimated at 1.4 times the size of Earth. Located well outside the habitable zone, Kepler-10b stands out as the smallest planet discovered outside our solar system so far.

And in February 2011, Kepler scientists announced the discovery of five planets, each orbiting in the habitable zones of stars smaller and cooler than our sun. If confirmed, these will represent the first planets of Earthlike size found in habitable zones.That same month, Kepler located six confirmed planets orbiting a sunlike star, Kepler-11, 2,000 light-years from Earth. This constitutes the largest group of transiting planets orbiting a single star ever discovered outside our solar system [source: NASA].

While those discoveries have been momentous, it's important to remember that Kepler so far has only searched a small fraction of the known universe. It may well be that in the years ahead, scientists will make even more amazing finds -- including, perhaps, an Earthlike planet that's home to living things.