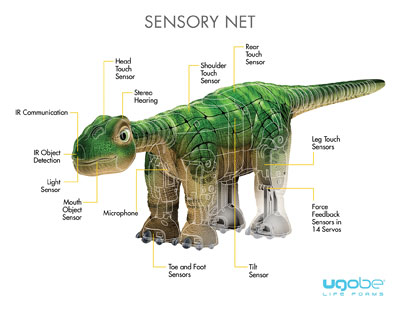 It takes 14 motors to control Pleo's movements. But Pleo has to do more than just walk around aimlessly. His movements have to be purposeful, and he has to respond to people and objects. For this to happen, Pleo needs sensors -- lots of sensors.

Some of these sensors are touch sensors. "We didn't want you to feel like you were finding a sensor or pushing a button or something," Sosoka explains, "so one of the things that we did is we put eight capacitive sensors in ... capacitive touch sensors like sometimes [are] on lights ... or on your iPod." Finding a way to use these sensors was a challenge. "If you're snowboarding you go to press your iPod through your gloves, it doesn't work because it's not pressure that does it. It's actually the electrical coupling with the water in your body."

This meant that Pleo's skin -- while completely necessary to make him look real -- could get in the way of the sensors. Sosoka says:

The idea was to try to tune them so that you could be a hair's breadth off of Pleo's skin, and he would detect your touch almost like he had tiny little hairs or something ... Well it turns out that it's really easy to run capacitive sensors on something like an iPod or a lamp, but it's very difficult to do capacitive sensors on something under a skin that's moving and buckling as he moves, [and] with the motors everywhere, with all these electrical interference ... so it actually ended up taking us a long time to sort out [the] interference problems.

These capacitive sensors look like thin, metal strips. They're located on Pleo's legs, back, shoulder, head and under his chin. In addition to these sensors are:

Interpreting and responding to all this input requires a network of processors and circuits. On the next page, we'll look at how Pleo handles all this data.