A robot places a small explosive device to destroy a larger car bomb. After the explosion, the robot returns to the vehicle to check for any unexploded devices.
Cris Bouroncle/ AFP/ Getty Images

Because the majority of police robots are highly mobile and have sophisticated audio and visual systems, police have the option to use them in several situations. The most common use for a police robot is in bomb removal and disposal. While robots are expensive, the cost is small compared to that of human life. Some robots are so tough that they can survive multiple blasts. Still, most of the time the goal is to avoid any sort of explosion at all.

When investigating a potential bomb, police officers use the cameras on the robot to assess the situation. If the robot is able to reach the suspicious device, the operator can use the claw to grip the device, lift it and move it to a cleared location for detonation. In cases where the device isn't easily accessible or appears to have a triggering mechanism that will activate if the device moves, police may have to detonate the device on-site.

Robots can also be used as a surveillance device. A robot with microphones and night vision can approach a potentially unsafe area while broadcasting information back to the operator. Using a robot can help reduce the time it takes for police to assess a situation, without placing an officer at risk.

By using the two-way audio system, police can communicate with anyone from suspects to hostages. Robots are useful in negotiation situations because unless they're visibly armed, they're relatively nonthreatening. Another benefit is that the robot's cameras can continue gathering information while police use the audio system to communicate with people in dangerous situations. The police can also use robots to deliver items like food to victims and suspects in hostage situations without risking an officer's life.

Some robots have sensors that can detect anything from narcotics to biological, radioactive or chemical weapons. Robots help first responders determine how dangerous an area is quickly and safely. Operators can maneuver robots through hazardous environments to find survivors. Some robots are strong enough to drag victims out of lethal situations.

Companies like Remotec and RoboticFX are constantly working to develop new robots for police forces, the military and other organizations that deal with hazardous situations. Newer models have better maneuverability, longer-lasting batteries, arms with more points of articulation and new accessories designed to help officers perform dangerous tasks.

In the future, robots might be more autonomous, eliminating the need for a human operator calling the shots from a command console. As robots become more agile, we may see an increase of an armed robotic police presence.

But even when companies can meet all the technological demands of an autonomous, armed police force, there'll still be social and political hurdles. What happens if a police robot malfunctions and harms someone, for example? Also, robots are expensive to purchase and maintain and require an officer's input to function.

But their drawbacks are minor when you consider that robots help keep law enforcement officials safe. For now, police robots are pretty rare -- there's little chance you'll bump into one the next time you're at Krispy Kreme -- but in a few decades, we might just see a rocket-shaped robot officer on wheels instructing us when to cross the street at the crosswalk.

You can learn more about robots and related articles by following the links below. ­ ­

Cut the Green Wire! No, the Red Wire!

Police can sometimes disarm a bomb using a robot's gripping tool, though it's more common for cops to use the robot to remove a bomb and transport it to a special container for detonation. Robots aren't quite sophisticated enough yet to disarm complex devices. Occasionally, police might opt to use the robot to deliver a small explosive charge to detonate the bomb without removing it [source: USA Today]. 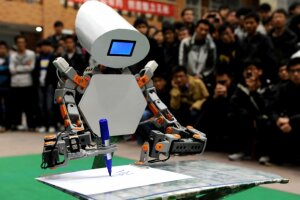 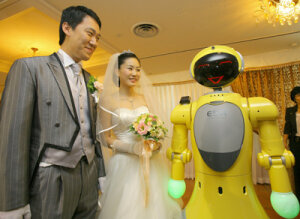