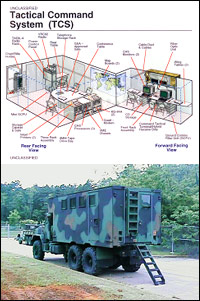 ­One PIF success story begins before the facility­ opened its doors. In 2001, the Army recognized the need for a weapon that could penetrate the thick concrete walls of enemy bunkers. AMRDEC took the lead on the project and began to investigate ways to modify TOW 2A missiles so that they could penetrate masonry. Once the PIF came online, it contributed to the project. In less than a year, the project team modified more than 100 missiles with the new bunker-busting technology [source: Pope].

Another missile modification project the PIF worked on was an improvement to the Hellfire II missile. The PIF worked with other departments to improve the lethality of the missile. In basic terms, that means they needed to make the missile more efficient and deadly. The team created a fragmentation sleeve that fits over a standard Hellfire II missile that wouldn't impede the missile's flight capabilities [source: Pope].

The example we used earlier of the mobile air traffic control tower has a basis in reality. The Army commissioned the PIF to create a Mobile Tower System (MOTS) to deploy in remote airfields. The PIF and the Army agreed to a contract that said the PIF had to design, build and deliver a prototype MOTS within a year. The tower had to include communications equipment that would allow soldiers in the tower unit to coordinate both air and ground maneuvers [source: PIF].

The PATRIOT Battalion Tactical Operations Center (BTOC) is another mobile operations unit the PIF designed. The BTOC is a mobile office inside a 5-ton van. It has computer workstations, printers, communications equipment, power supplies, encryption devices and a conference table [source: Federation of American Scientists]. The PIF built 16 BTOC vehicles over a two-year period [source: PIF].

­Recently, the PIF began converting five Bell 206 helicopters from commercial aircraft into military choppers. The Army commissioned the helicopter conversion on behalf of the Iraqi Air Force. Once finished, the Army will deliver the helicopters to a U.S. training school in Iraq [source: Vaughn].

Not every PIF project involves modifying or building new weapons and vehicles. The fabrication facilities in the PIF allow engineers to create replicas of equipment for training or illustration purposes. For example, fabricators at the PIF have built replicas of land mines used by other nations as part of a training program f­or soldiers. The inert replicas are accurate in size, shape and weight and gave soldiers a safe way to study the explosive devices [source: PIF].

These are just a few of the projects the Prototype Integration Facility has been a part of in its brief history. As the nature of battle continues to evolve, operations like the PIF become more important to maintain a flexible and responsive military. The next time you hear about a nifty new military technology, there's a good chance it started out as a project at the PIF.

­To learn more about the PIF and other military topics, march on over to the links below.