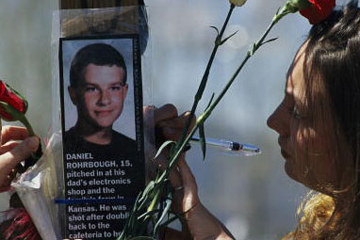 Seventy percent of Americans have endured a traumatic experience. Here, survivors of the 1999 Columbine High School shootings in Colorado remember one of the students killed that day.
Sisse Brimberg/National Geographic/Getty Images

Post-traumatic stress disorder is an anxiety disorder. In its simplest terms, it's a specific set of symptoms that result from a traumatic experience. These symptoms must present themselves in a certain way within a certain period of time and for a certain duration to be considered PTSD. Another criterion is how much of an impact the condition has on the patient's everyday life.

The cornerstone symptom of PTSD is re-experience of the trauma (also called intrusive recollection). This means the person is plagued with unwanted memories of the event that so badly scarred him. These memories can come in the form of nightmares (the nightmares of PTSD might not even be "dreams" – there's an idea that it's a neurobiological phenomenon that is interpreted as having been a dream upon awakening), flashbacks and recollections. In each of these instances, memories of the event suddenly and unexpectedly flood the sufferer, and he feels like he's experiencing it all over again. This can be triggered by a cue (such as seeing or hearing a car accident similar to the one the person endured), or it can come unbidden. The person's brain releases chemicals as if he is experiencing the trauma, creating a fear response that's both physical and mental.

Re-experience is one of four main symptoms of adults with PTSD. The other three are avoidance, numbness and hyperarousal [source: National Center for PTSD]:

The tricky part in diagnosing the disorder is that, after a trauma, most people experience the same symptoms as those of a person with PTSD. The difference is that these symptoms fade on their own over time, whereas those with PTSD continue to be plagued by anxiety.

For example, anyone who is in a serious wreck will predictably be shaken by the event. Generally, a person will eventually get past it and move on with his life. He will be able to remember the event without becoming terrified. He will be able to pass by another car wreck without re-experiencing in detail his own. A person with PTSD will not. He is continually negotiating the mental and physical side effects of his traumatic event.

So researchers have attached stipulations to the PTSD diagnosis. Chief among them is that for a person to receive a diagnosis of PTSD, he must have the symptoms for more than one month. These symptoms may show in various ways:

A child with PTSD may have different symptoms. She may behave badly, become needier, and re-experience the event through drawings and explicit re-enactment the trauma. As children with PTSD grow older, research has shown that these symptoms will come to more closely resemble adult symptoms [source: National Center for PTSD].

Who are the people with PTSD? And why are some people more likely than others to develop it? In the next section, we'll find out what researchers have uncovered about susceptibility to PTSD.