Risk and Protective Factors for PTSD 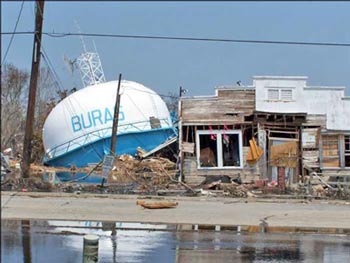 Although natural disasters like Hurricane Katrina can have an impact on the development of PTSD, the chances are increased when the trauma is man-made.
Photo courtesy EPA

Around 70 percent of Americans have endured some traumatic experience within their lifetimes [source: PTSD Alliance]. These may come in the form of a bad car wreck, a rape or an assault. It can be surviving a natural disaster, experiencing a loved one dying unexpectedly, or even killing another person, as in war. Up to 20 percent of those who've suffered go on to experience PTSD [source: PTSD Alliance].

Early researchers believed that all people were at equal risk of developing PTSD after experiencing a trauma. However, further study has revealed that some risk factors may make one person more likely to develop PTSD than another.

One of the biggest risk factors is a prior trauma. People who have already undergone one traumatic experience and then suffer another are more likely to develop PTSD than a person who experiences a single trauma [source: National Center for PTSD]. Why? A class of hormones in the brain called glucocorticoids help control our response to stress, and after a traumatic experience, this hormone can become depleted. When another trauma occurs, and the glucocorticoid levels are already low, the stress response to the experience can be more intensified. This condition can increase the likelihood of the person developing PTSD [source: Kaouane et al].

Personality traits have also been shown to play a part in the development of PTSD. People who have an optimistic outlook on life -- a belief that there's order to the universe, and that other people are generally good -- have less of a chance of developing PTSD after suffering a trauma. So, too, do people who are resourceful -- who tend to take obstacles and challenges head-on [source: NCPTSD].

Conversely, those with problem-avoidance behavior have been shown to have an increased risk of developing PTSD. This indicates that part of the development of PTSD is increased by the avoidance symptom -- the desire to ignore the trauma rather than address it [source: NCPTSD].

There is also some emerging evidence that PTSD may occur on a genetic level. One gene being looked at is the serotonin transporter gene. A paper indicated that mutations in this gene can have an impact on attention to environmental threats, suggesting that if certain people have a hard time modulating attention to threat in the environment (for instance through hypervigilance) they may be more prone to PTSD [source: Wald et al].

Another study suggests that PTSD may be the result of epigenetics – changes to the function of genes that can happen in a lifetime. A 2009 study of Detroit residents showed that those who fit the criteria for a PTSD diagnosis had six to seven times the regular amount of epigenetic changes to their genes of those in the control group. Most of the genes that had undergone epigenetic change were responsible for immune system function [source: Uddin, et al].

However, the most important factor in the development (or not) of PTSD is the existence of a strong social support network. Time and again, people who have close relationships with those around them have been shown to be much less likely to develop PTSD and more likely to recover from it. Trauma counselor Jacob Lindy referred to this network as a trauma membrane, a group of people who form a protective cover over the person who has suffered the trauma and protect that person from undergoing further damage [source: Satel and Sommers]. For example, a 2008 study indicated that Israeli kids were less depressed after exposure to rocket attacks if they had a solid social group [source: Henrich and Shahar].

It should be noted that what's most important about this social network is how it's perceived by the sufferer. A well-intentioned but overbearing support network will have a less positive effect than one that allows the sufferer to grieve on her own terms [source: Perry].