PTSD and the Military 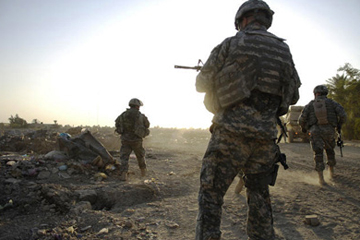 The military is the group of people most susceptible to PTSD.
Photo courtesy DVIC

The world is rife with potentially traumatic situations. Events like Hurricane Katrina, the Columbine High School shootings and the tsunami in Southeast Asia can all lead the people who experienced them to develop PTSD. It's been shown, though, that man-made traumatic events (like Columbine or war) have a greater impact on the incidence of PTSD than natural disasters (like Hurricane Katrina) [source: Galea, et al].

This is just one reason that, on the whole, no other group is more vulnerable to developing PTSD than the military. Experiences like killing other people, handling corpses, being fired upon, witnessing others die and suffering life-threatening injuries can all create trauma in a combatant. The development of PTSD has been shown to be directly related to the intensity of the traumatic experience, and soldiers are often faced with the most stressful of situations on a routine basis. For example, the Vietnam study showed that 15.2 percent of male Vietnam veterans and 8.5 percent of female Vietnam veterans overall had PTSD. However, when only those who had fought in high-intensity combat were evaluated, those numbers jumped to almost 36 percent and 18 percent, respectively. Studies have also shown that people who develop military-related PTSD are more likely to develop it chronically [source: NCPTSD].

Comorbidity (having another disease or disorder) can make someone more vulnerable to PTSD or make existing PTSD worse. Prior drug and alcohol dependency, an existing personality disorder, a family history of mental issues, and brain injuries are all examples of comorbidities. These factors have been shown to directly and negatively affect the impact PTSD has on a person. PTSD can also aggravate an existing drug problem, as well as decrease the likelihood that a person will recover quickly from an injury or illness.

This is of particular concern for some researchers who are studying soldiers fighting in Iraq and Afghanistan. With brain injuries regarded as the "signature wound" of the Iraq war, and most of these injuries coming as the result of a traumatic experience like the explosion of a roadside bomb, the likelihood of these soldiers developing PTSD is increasing. A 2004 study showed that soldiers have a 15 to 17 percent chance of developing PTSD after fighting in Iraq, versus a 9 percent chance before deployment or 11.2 percent after duty in Afghanistan [source: Hoge, et al].

What's more, the military is experiencing a plague of suicides among active and returning military. A Veterans Administration study found that 22 active and former military service people committed suicide each day in 2010 [source: Briggs]. These suicides were not necessarily linked to PTSD in the study, however.

Combatants enlisted today are at added risk due to guerilla warfare during fighting conflicts. In guerilla warfare, the chances for witnessing and taking part in abusive violence, atrocities and civilian casualties increases, and all of these factors have been shown to raise the likelihood that a person will develop post-traumatic stress disorder as a result [source: NCPTSD].