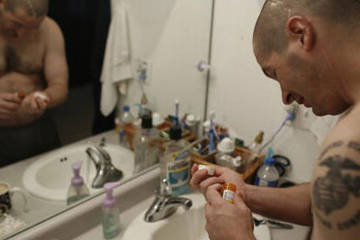 Antidepressants are often prescribed to people with PTSD, like this soldier.
Charles Ommanney/Getty Images

A combination of counseling and medication is often used to treat post-traumatic stress disorder.

Two versions of one type of drug, known as selectiveserotonin reuptake inhibitors (SSRIs), are already being used to treat some symptoms of PTSD. SSRIs have been shown to reduce depression and anxiety in patients and two SSRIs, Zoloft and Paxil, are the only medications approved by the U.S. Food and Drug Administration for treatment of PTSD [source: NCPTSD].

While SSRIs help to alleviate symptoms and can make people with PTSD more receptive to counseling, another drug, D-cycloserine (DCS), which is used to treat tuberculosis, may have an indirect effect on treating PTSD. DCS is known for its ability to enhance learning by affecting a type of receptor in the brain. Researchers hope that when used in conjunction with exposure therapy the drug may help separate memories from their association to a stimulus (memory extinction) and diminish the fear response in PTSD patients[source: deKline]. Prazosin, a decades-old blood pressure medication, has impressive efficacy in reducing nightmares [source: WebMD]

Researchers are also studying propranolol, a beta-blocker, to determine its effects on PTSD symptoms like hyperarousal and their secondary effects like sleeplessness. The drug may also prove to be useful as an agent that can block the creation of fear memories from an event [source: Lavine].

In the next section, we'll learn about some cutting-edge research and therapy for PTSD.