A Swarm of Parallel Brains 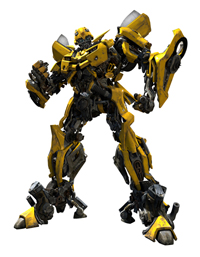 Transformers are self-aware and can make decisions on their own, but their moving parts aren't autonomous.
Image © 2007 Dreamworks Pictures

In addition to their size and modular structure, self-reconfiguring robots are different from Transformers in one major way. Optimus Prime and other Transformers are self-aware and can make independent decisions, and they keep their brains in one location within their bodies. A Transformer's brain controls each of its moving parts, and the parts themselves have little if any autonomy.

In most modular robot configurations, though, each module has some decision-making power and gets to help figure out where it's going to move. Instead of one module being the boss of all the others, planning and movement capabilities are distributed across all of the modules.

This idea -- a swarm of little robots, each of which gets to decide where it's going to go -- might sound disastrous. But the modules are programmed with a set of geometry-based rules about how to move. They're also programmed with algorithms that govern their movement. These algorithms and rules allow the robots to figure out how to change from one shape into another and to move across terrain.

For very complex maneuvers, the robots instead plan out a series of sub-shapes rather than trying to make a major change in one step. For example, a lattice robot that needs to change from a random pile of modules to a bipedal robot might first form the legs. Then, it might use those legs as a scaffold to build the upper half of the robot.

Currently, each modular robot system has its own rules to govern how it moves and reconfigures.
Image courtesy Palo Alto Research Center Incorporated

At this time, many of these robots can make simple transitions from one shape to another on their own. More complex changes might require the help of a scientist, making the collection of robots semi-autonomous rather than autonomous. A few robots that are still in the early stages of development receive all of their instruction from a computer workstation and make no decisions on their own.

Currently, most re-configuring robots have their own system of rules and algorithms, and rule sets work only for the robots for which they were designed. In other words, the rules for Rus Robotics Laboratory's Crystal won't work with Molecule.

However, scientists are using computer simulations to research movement theories that could work regardless of what a robotic module looks like. These theories could establish ground rules for robot movement, including:

If successful, this research could make it easier for engineers to make new, working modular robots that follow the same rules of movement.

Even though these robots don't walk and talk like Transformers do, they can change into virtually any shape, given the right programming and instructions. To find out more about them and about Transformers, see the links below.

Where do Transformers Keep their Brains?

While working on this article, the HowStuffWorks staff had a lively discussion about just where Transformers keep their brains. We all intuited the same answer - a Transformer's brain must be in its head (or in its cockpit in vehicle form). Many comic book and cartoon depictions seem to support this idea. However, it doesn't entirely explain how parts of Optimus Prime can operate separately, unless Prime uses radio or infrared signals to send and receive commands. It also doesn't entirely explain why Constructicons' personalities are different from their component Transformers'. You can read more about Transformers' brains and how they work at The Matrix, an unofficial Transformers magazine.