What if someone released a large amount of helium into a small space? 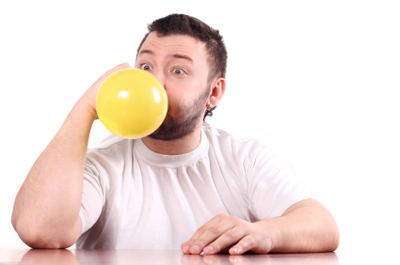 Releasing helium into an small space may affect evreyone's voices, but they won't be as high in pitch as they would be sucking directly on a balloon.
Photo courtesy iStockPhoto

Talking is an amazing skill. When you talk, your voice starts with a stream of air flowing up your trachea from your lungs. The air passes between the vibrating vocal chords in your larynx. The sound produced consists of a fundamental frequency, which determines your voice's pitch, and harmonics of this frequency. For adult males and females, the average frequencies of the fundamentals are 130 hertz and 205 hertz, respectively.

The sound that comes out of your mouth gets modified by the shape of your throat, mouth and nasal cavities, and by movements of your tongue and lips.

One of the things that determines your voice's pitch is the speed of sound. In air, sound travels at 330 meters per second (m/s) or so. It turns out that the speed of so­und in helium is almost three times faster -- nearly 900 m/s. So, when you talk with helium in your lungs, all of the sound waves travel nearly three times faster through your throat, mouth and nasal cavities, creating a pitch that's nearly three times higher. Presto -- you sound like Donald Duck!

­At a pressure of one atmosphere, with pure helium in your vocal tract instead of air, the pitch of your voice will be about two and a half octaves higher than usual. It's highly unlikely that someone would be able to release enough helium into an office space to create a situation where everyone would be breathing in pure helium. Even if it were possible, the people would suffocate very quickly.

But what if there was a mixture of helium and oxygen -- would that have a discernable impact on everyone's voices? It turns out that if you're breathing a helium-oxygen mixture containing 68 percent helium by volume, the pitch of your voice does increase -- but only by one and a half octaves. Therefore, if someone were to release enough helium into the office so that the air contained 68 percent helium by volume, there would be a noticeable lift to everyone's voices. However, it wouldn't be that same familiar squeaky effect that sucking the helium out of a balloon produces. 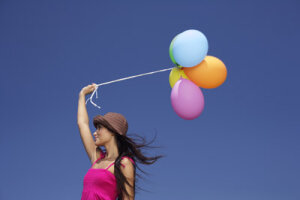 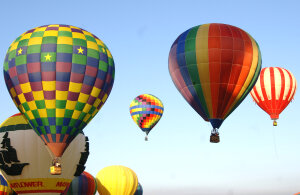