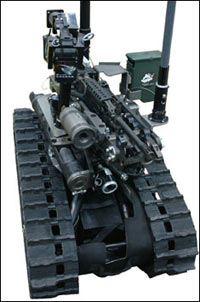 Ideally, robot soldiers would be able to achieve the same military goals a human group could manage. They'll have to be autonomous and able to identify targets, distinguish between friendly and enemy forces, engage the enemy and interact with others in ways beyond simply firing a weapon. Right now, most robots are controlled remotely by a human being at a command station, though some robots have limited autonomy and can get from point A to point B with minimal supervision. For a robot army to be an effective fighting force, it would be best if individual robots could assess situations and make decisions without relying on human input.

The Army continues to work with government agencies like NASA, universities and corporations to push for more research into achieving this goal. Part of the Future Combat Systems Program is the Autonomous Navigation System (ANS) project. ANS's goal is to create a modular navigation system that technicians can install in all unmanned and manned ground vehicles. The system will include navigation sensors, global positioning systems (GPS), inertial navigation systems (INS), perception sensors and collision detection software.

One major concern for the military and engineers alike is the chance that a robot malfunctions. The possibility of a robot firing on friendly forces or innocent bystanders is often a part of discussions about using armed robots. It might seem paranoid, but malfunctioning robots have caused scares in the past. In 1993, a bomb squad robot in San Francisco malfunctioned while on a mission to disable a bomb. The robot began to spin uncontrollably just before it could grasp the explosive device. Fortunately, the robot didn't cause the device to detonate [source: The New York Times].

Military officials say that the goal of using unmanned vehicles and robots is to be able to engage in combat without risking human casualties, or at least human casualties on our side. Another benefit is that even though robots are expensive, they may actually be cheaper than fielding human soldiers -- robots require maintenance, but they don't need health or retirement benefits. They might also be able to serve longer terms than human soldiers could.

Many believe that robots will never completely replace human soldiers, but they will be used in particularly dangerous or tedious missions. A robot soldier will never be bored, so it's ideal for guard duty or long-term surveillance missions. South Korea plans to use robots to patrol its border with North Korea. The robots are called Intelligent Surveillance and Guard Robots, and they use regular and infrared cameras to detect intruders up to 2.5 miles away. The robots can pursue a target, demanding a coded access number once they're within 10 meters of the intruder. If the target can't give the correct code, the robot could sound an alarm or even fire a weapon at the intruder.

In the next section, we'll learn about the sort of equipment needed to make robot soldiers a reality.