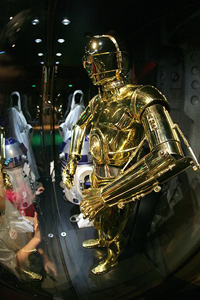 Will we ever have robots like C3P0 and will they in turn change us? See more robot pictures.
AP Photo/Dr. Scott M. Lieberman

The field of robotics is complex. It's more than computer science and engineering. Disciplines ranging from medicine to philosophy are part of its foundation.

It's not hard to imagine a future in which robots are an integral part of our daily lives. There are dozens of science fiction stories focusing on robots in the future. In some, robots cater to our every need, freeing us from mundane tasks to concentrate on loftier subjects. In others, robots rise up against humanity and become our greatest threat. In any case, robots change the way humans behave and think.

To some extent, that's happening already. Applications like bionic limbs and cochlear implants are helping people regain functionality lost due to injury or illness. Doctors and scientists at the Boston Retinal Implant Project are working on a bionic retinal prosthesis that could restore a blind person's sight. All of these medical applications are related to robotics and have a demonstrative effect on human lives.

Robots can also evoke an emotional response in us. The Pleo dinosaur robot toy is a good example. People tend to look at Pleo as if it were a real pet. The robot reacts to stimuli and simulates an animal's responses. It seems to be able to express happiness, fear, frustration and even pain. While all of these reactions are artificial, our responses to Pleo are real.

Our ability to feel empathy toward an inanimate object may lead to another use for robots: therapeutic companionship. A well-designed robot that can react to our emotional states could serve as a companion during difficult times. In a medical context, robots could gather data about a patient to help doctors monitor the patient's health.

Robots may also become useful tools to help children develop social skills. As we increase our understanding about autism and related conditions, we can design tools to help people integrate into society and understand social cues. Robots may teach us more about ourselves than we would learn otherwise.

Then there are the industrial and military uses for robots. We're already relying on robots to work assembly lines. Military branches and police squads use robots for bomb detection and other hazardous duties. We'll likely see even more widespread use of robots in these industries in the future.

Robots will continue to change us as they become both more common and more sophisticated. The real question is: How much will we change?

Learn more about robotics by following the links on the next page.