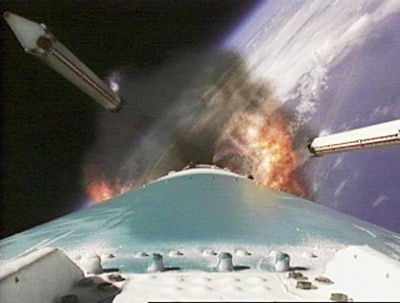 When monitoring the data of a rocket launch, the faster the information travels, the better. RocketCam can send live feeds of the launch, and this situational awareness means ground engineers know what's happening in real time. And they can make fast, informed decisions if something goes wrong.

RocketCam can be a highly valuable tool for research in space as well. As part of the Lunar Crater Observation and Sensing Satellite (CROSS) mission, NASA plans to send a rocket to the moon -- in fact, the plan is for the rocket to crash into the moon in an attempt to stir up debris. This crash, they suspect, could release water ice. Or, if not, analyses of the debris might offer clues as to whether there are traces of water on the moon. The RocketCam will aid in the research. Unlike with shuttle launches, it won't be released on the way. It will be attached to a small spacecraft that separates before impact so that the camera can send NASA video feed of the crash.

Public relations is also a major part of the business of space exploration, and many consider video the best way to get people excited about it. Watching video of a launch from the ground is only so interesting to television audiences. But give them a video view from the rocket itself, and they're riveted.

Here, the RocketCam shows a view from the external fuel tank as shuttle releases it.
NASA/Ecliptic Enterprises Corporation

Public appeal goes beyond NASA and shuttle launches -- private companies can help drive space tourism with video, and they use RocketCams as well. After the Columbia disaster in 2003, NASA imposed a hiatus on its shuttle program, meaning private launches got more attention. One of the most famous of these private uses was for suborbital SpaceShipOne, the first manned flight to space altitude by a private pilot in June 2004. To help encourage the expanding field of private space exploration, Ecliptic has made efforts to keep the RocketCam affordable (an easy endeavor given that the company doesn't manufacture the camera technology, just its rugged casing) [source: Fine].

RocketCam has been included on more than 60 launches, including rockets (orbital and suborbital), spacecraft and shuttles. A lot of these launches include non-space-related projects as well, which we'll talk about next.

Blinded Me with Rocket Science

RocketCam's first blastoff on space shuttle Atlantis in October 2002 provided viewers with spectacular video -- but only for a few minutes. Unfortunately, the rockets that work to separate the solid rocket boosters from the shuttle released exhaust that significantly blurred the RocketCam view. Now, NASA mounts the RocketCam strategically to avoid this problem [source: Adams].