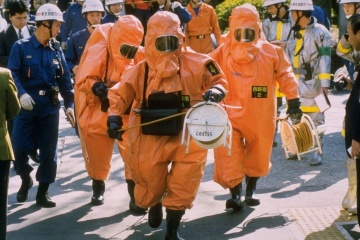 Sarin gas was used in an attack in the Tokyo Metro system in 1995.
© Noboru Hashimoto/Sygma/Corbis

Each day we're bombarded by news stories of bombs and bullets killing and maiming people in all corners of the world. The effects of those conventional weapons are horrifying ... and frequent enough to be mind numbing. A chemical gas attack, on the other hand, still has the ability grab headlines, provoking responses from concerned citizens and government agencies everywhere.

That's especially true when sarin gas (also known by the military designation GB) is the chemical in question. Sarin is a nightmarish, human-made concoction that's classified as a nerve agent, meaning it wreaks havoc on the nervous system. It takes only a tiny amount of sarin to cause serious harm, and people exposed to this agent often die as the muscles they use to breathe seize.

Sarin is an insidious substance. It has no taste, no color and no odor. Often, people have no idea that it's even present. Humans are affected when they breathe in the gas or when it touches just about any part of their bodies.

The effects of a moderate to high exposure take hold immediately, and if a lethal dose occurs, there's almost nothing that can prevent death. In the case of lower doses, a person may have a window of opportunity to seek medical treatment to prevent death or permanent nerve damage.

If there's a bit of good news about sarin, it's this -- not many people are ruthless or heartless enough to put it to use. The gas is roundly condemned by governments around the globe as an unconscionable weapon of mass destruction, and one that warrants unbridled retaliation against those who would deploy it as a means to an end.

That said, sarin is still a player in the game of world power. Whether it's wielded by psychotic despots or determined terrorists, this deadly gas is a sure way to bring attention to a cause, or simply rain down despair and suffering.

Keep reading and you'll see where sarin came from and how the powers that be try to keep this poison under control.