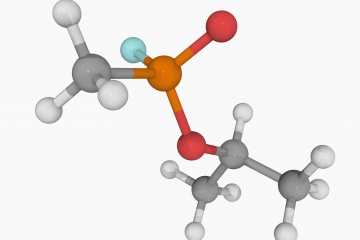 This molecular model of sarin shows the carbon atoms in gray, hydrogen in white, fluorine in blue, oxygen in red and phosphorus in orange.
©LAGUNA DESIGN/Getty

Sarin is an entirely synthetic compound. It has exactly one use -- as a weapon in chemical warfare.

It looks harmless enough. At room temperature, sarin is a colorless liquid. Left in an open container, it evaporates and quickly breaks apart, chemically speaking. This volatility means that sarin has a relatively short shelf life of only a few weeks or months depending on the quality of the ingredients used to make it.

To prevent sarin from degrading before it's used, engineers may add stabilizing chemicals. Alternately, they may build compartmentalized weapons that prevent the ingredients from mixing until the shell is launched towards its target. Along the flight path, the shell's spinning motion combines the interior chemicals, resulting in sarin gas, and then bursts in a plume that kills anyone nearby.

One chemical name for sarin is (RS)-Propan-2-yl methylphosphonofluoridate, although the esoteric notation of the molecular compounds masks the true wretchedness of its effects. Ultimately, sarin is a series of chemicals that blocks an enzyme called acetylcholinesterase. Without this enzyme, your body basically overloads on a neurotransmitter called acetylcholine.

Too much acetylcholine and your muscles remain in a state of contraction and subsequently, extreme fatigue. This has a lot of eventual effects on the human body, but the one that causes death is respiratory failure, as the muscles that keep you breathing quickly become exhausted.

It's a wretched way to die. Keep reading and you'll find ways to potentially survive a sarin attack.