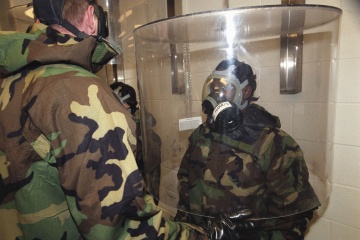 Sarin is heavier than air, so it tends to settle in lower areas, such as valleys or even basements -- the places a lot of people would hide to escape conventional weapons like mortar shells or bullets. If there's no wind, it can hang in the air for six to eight hours before it fully dissipates.

In most cases, though, the aerosolized particles tend to evaporate or disperse rather quickly. This is a good thing for anyone who happens to be in the targeted area. But sarin's disappearing act complicates the efforts of experts who try to confirm the chemical's use and who deployed it.

To confirm a sarin attack, investigators must immediately begin their search for clues or risk losing the trail altogether. Within a few hours, the human body renders sarin itself nearly undetectable. However, as sarin deteriorates, it leaves behind smaller molecular particles such as isopropyl methylphosphonic acid (IMPA) or cyclohexyl methylphosphonic acid (CMPA).

To confirm IMPA or other sarin byproducts, scientists lean on high-tech tools. These tools, such as gas or liquid mass spectrometers, can provide a detailed profile of a whole range of chemicals with a given sample.

Scientists can attempt to gather and analyze samples in the field, too. To do so, they draw blood samples and test for acetylcholinesterase, which as you already know enables normal muscle contraction processes in the body. The less acetylcholinesterase they find, the greater the possibility that a nerve agent was present.

There is one notable caveat, though. Gathering samples in an attack zone is notoriously difficult, for a whole lot of obvious reasons. These are inherently dangerous areas that could be subjected to further violence, including the possibility of follow-up sarin use.

The flip side, of course, is that samples must be obtained as soon as possible, otherwise authorities risk losing opportunities to analyze potential chemical evidence before it disappears.