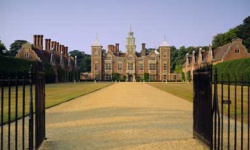 Around May 19 every year, Anne Boleyn's headless ghost pays a visit to Blickling Hall in Norfolk, England.
John Miller/Getty Images

In October 2007, the National Trust of England named Blickling Hall the most haunted home in the country [source: McDermott]. Located in Norfolk, England, the stately house is said to have a special guest stop by every spring.

Blickling Hall was one of Anne Boleyn's childhood homes. Boleyn was the second of King Henry VIII's six wives. Henry was obsessed with having a male heir to the throne and consequently divorced Catherine of Aragon, his first wife, because none of the males she gave birth to survived. He gave it another go with Anne Boleyn, who also failed to produce a son (but did give birth to the future Queen Elizabeth I). To arrange his second divorce, the king cooked up adultery charges against Boleyn that stuck. Her punishment of allegedly cheating on one of the world's most powerful men at that time was death.

On May 19, 1536, Anne Boleyn was beheaded. Every year, on the anniversary of her execution, Boleyn's headless ghost reportedly arrives at Blickling Hall in a carriage drawn by a headless horseman. But she hasn't lost her head completely in the afterlife -- she carries it along with her during her hauntings.