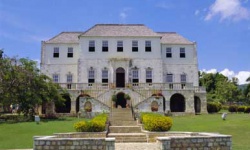 Annie Palmer, known as the White Witch, lived in Rose Hall in Jamaica where she seduced slaves and lovers and then killed them.
Robert Harding/Getty Images

The tales of the murderous Annie Palmer of Rose Hall still frighten children in Jamaica. Built in 1770, Rose Hall was a sugar cane plantation and home to Palmer and her husband. Palmer grew up in Haiti and learned voodoo from her nanny, which would later serve her in her dastardly schemes.

When Palmer became sexually unsatisfied with her husband, she began sleeping with slaves on the plantation. In order to keep them quiet about the affairs, she either killed these men or ordered other slaves to do so. Wanting to gain sole possession of her husband's wealth, she poisoned her first husband and later married and killed two other men [source: Belanger]. Her sexual escapades continued as well. In case she encountered a man unwilling to pleasure her or a slave trying to escape, Palmer had a pit dug 16 feet (4.8 meters) below the house where she would banish these people [source: Belanger]. As her nefarious reputation spread around the island, she became known as the White Witch.

According to legend, Palmer cast a fatal voodoo hex on a housekeeper who caught the eye of one of her lovers. Supposedly, the housekeeper's grandfather later strangled Palmer to death [source: Belanger]. Her body was buried in an aboveground coffin in the eastern wing of Rose Hall. According to the lore, the White Witch's spirit, along with those of the slaves she had murdered, continued to haunt the house. When new tenants attempted to move into Rose Hall, they were quickly driven away from the haunted grounds. Eventually, in 1965, a couple bought the house and converted it into a museum. Yet even today, visitors and employees have reported hearing men's screams and doors slamming, as well as other paranormal phenomena.