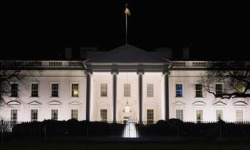 It must be hard for former presidential couples to adjust to life after the White House. After four or more years, they probably get used to never having to take out the trash, wash dishes or change a light bulb, not to mention the other amenities afforded to arguably the most powerful people in the Western world. Perhaps that's why some have stuck around after their terms -- and lives -- ended. That's right: 1600 Pennsylvania Ave. is not only the most famous address in the United States, but also one of the most haunted.

John and Abigail Adams were the first presidential couple to live in the White House, taking residence in 1800, and Abigail has lingered ever since. Her ghost is said to hang laundry in the East Room on occasion [source: McLaughlin]. Another first lady, Dolley Madison, has reportedly been quite territorial with White House renovations. During her husband's term, Dolley oversaw the landscaping of the Rose Garden, where presidents often meet with the media. When President Woodrow Wilson's wife tried to have the garden dug up, the story goes that Dolley's ghost appeared and instructed the workers not to tear up her beloved garden [source: Scott and Norman].

Going along with a rose theme, the Queen's Bedroom, which was once called the Rose Room, is known as a paranormal hotspot in the White House [source: Scott and Norman]. It not only houses the bed of President Andrew Jackson but his ghost as well -- people say they've heard it walking around the room. Jackson's ghost is rumored to hang out in the Red Room as well. People have seen Abraham Lincoln's ghost ambling down the halls and staring out of windows. He pays visits to the Lincoln bedroom at times as well.

Don't believe us? The White House Web site, during George W. Bush's presidency, once had a page devoted to its ghost sightings, spotted by notable residents like Eleanor Roosevelt and Jimmy Carter's daughter.