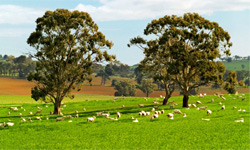 That bucolic view of Junee, New South Wales, Australia, doesn't exactly make you think of haunted houses does it? But this is indeed the hometown of the legendary Monte Cristo Homestead.
Peter Walton Photography/Getty Images

Theories vary regarding why some houses are haunted and others seem free of things that go bump in the night, but as we've seen from several other examples on our list, tragedy seems to be a common thread. It's no surprise, then, that the Monte Cristo Homestead should have such a well-known reputation for paranormal activity. Originally built for the Crawley family in 1884, the Monte Cristo Homestead initially seemed like an ideal setting for the family and its growing fortune, but that soon changed when one of the Crawley's servants dropped their infant daughter down a staircase, killing her. The servant insisted a force unseen pushed the child from her hands [source: Belanger].

In 1910, Christopher William Crawley, the head of the Crawley household, died of heart failure. His passing marked a change in his wife, Elizabeth Crawley. She became extremely reclusive over the next two decades of her life and, according to some, extremely cruel. Several tragic deaths took place at the household while Elizabeth lived there. A pregnant servant fell to her death from a balcony, and another servant, this time a young boy, was burned to death [source: Belanger].

After Elizabeth died, the house fell into disrepair and suffered at the hands of looters and vandals before Reginald Ryan, a local man, purchased it in 1963. He and his wife Olive immediately knew their home was haunted. Lights acted strangely, and the couple could feel the presence of ghosts and eerily cold spots throughout the property. Psychics were invited to the home and reported strong paranormal activity as well, raising suspicions that the house held terrible secrets in its walls. Today, visitors can test those claims themselves by taking a tour of the property and its grounds.

Like the Monte Cristo Homestead, the next house on our list was the height of luxury when it was first constructed, and its outward beauty hid a horrible secret. Read on to find out more.