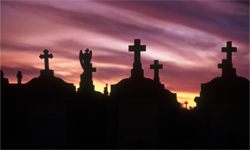 What secrets were buried with the occupants of this New Orleans cemetery?
Kevin Leigh/Photolibrary/Getty Images

Standing three stories high on Royal Street in New Orleans, the Lalaurie House was once the envy of the city's high society. In 1831, a beautiful socialite by the name of Madame Lalaurie purchased the house with her third husband, Dr. Louis Lalaurie [source: Cable]. By all appearances, Madame Lalaurie lived a charmed life.

Like many of the wealthiest members of society, Madame Lalaurie owned slaves. By law, slave owners were expected to keep slaves well fed, clothed and cared for, but a series of incidents made some of Lalaurie's peers think the socialite was, at best, neglecting those duties and possibly much worse. Those suspicions were confirmed when a neighbor saw Lalaurie chase a child of a slave through the courtyard, into the house, onto the roof. Moments later, the child had fallen to her death [source: Cable].

Lalaurie was fined and forced to sell her slaves, but relatives purchased them and sold them back to her immediately. Although her reputation suffered because of the incident, she remained a popular figure in town until a fire, set by one of Lalaurie's own slaves, brought the attention of the entire community to the Lalaurie House. As the fire burned, several people broke down the door to the slave quarters, and they pulled seven severely maltreated and malnourished slaves from the building, two of whom later died from their mistreatment. Two others were found buried on the premises. The citizens of New Orleans, disgusted and furious with Lalaurie, chased her out of town, looted her possessions and nearly destroyed the Lalaurie House [source: Cable].

Madame Lalaurie herself, having fled to Paris was never brought to justice for her crimes. The house itself later was remodeled and retains little of its original layout, but it remains well known as one of the most haunted places in New Orleans -- at least for some.