There is a sea change going on in death.

Sorry, but that doesn't mean we're dodging the Reaper. Sure, we're living longer, but we still seem to die, all the same. It's what happens after we die that's getting a little more interesting.

It used to be that close to literally everyone in the United States was buried after death. In a casket, 6 feet (nearly 2 meters) under, full stop. But by the mid-20th century, cremation was becoming an increasingly viable option as crematories were built. Now, nearly half of Americans are being cremated, with over 65 percent of living folks in the U.S. and Canada reporting that they are seriously considering or have decided on cremation after death. So that means a lot of ashes are going to be sitting in a lot of closets.

Unless you're interested in you or your loved one's body becoming a wholly unique piece of art, or even a more utilitarian mug or bowl. The artists and designers at places like Eternal Ware and Chronicle Cremation Designs either use human ash in their actual pottery work, or as a glaze. (How much they use depends on the artist and design.) You can carry your pet in a pendant, or your mom in a mug.

And no, human ashes aren't going to present a health hazard. Not only are they fired in an extremely hot kiln, but they've already been, well, incinerated. The ashes pose no risk, even if you're eating cereal from a bowl made out of them.

And hey, if all that sounds too tame for you, there's always space burial. It's the ultimate "posthumous adventure package," writes Nick Gerbis. The next memorial spaceflight is scheduled for liftoff on Jan. 31, 2017, at Cape Canaveral, Florida.

Now That's Interesting
Not into pottery? Perhaps gems made from human ashes are more your style. Want a big production? Have your loved ones ashes burst into the sky in colorful fireworks that sprinkle over the ocean.

These 8 Pictures of Puppies Can Help You Focus, Melt Your Heart 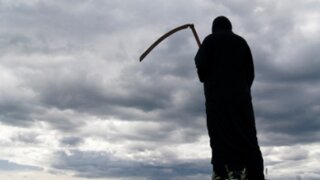