The Hanging Coffins of the Bo 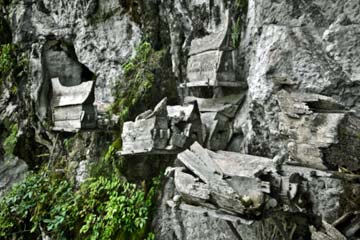 Several other cultures have honored or protected their dead (and the valuables they're laid to rest with) in hanging coffins. These coffins sit on platforms suspended from the face of a cliff near the Ke'te Kesu village in Sulawesi, Indonesia.
Glen Allison/The Image Bank/Getty Images

One of the world's greatest unsolved coffin mysteries is the case of the hanging coffins of China -- a phenomenon that has yet to be explained definitively.

China's hanging coffins are a group of coffins in the Bochango Valley, once numbering up to 280 but now closer to 100, which are tucked in caves and under cliffsides between 350 and 400 feet (107 and 122 meters) high. Research has revealed that the coffins were left by the Bo people, an ethnic minority living in what are now the Sichuan and Yunnan provinces of China. Once among China's most common funeral practices, these wooden, unpainted, unadorned coffins date back to as early as 770 to 476 BCE. The most recent is only around 400 years old. But how could an ancient civilization have engineered such a feat? And why?

There's no lack of theories. Some posit that they created earthen ramps supported by planks or wooden scaffolding to allow them to reach the coffins' final resting places. However, although no explanation has been definitively established, the most widely accepted hypothesis today is that the Bo actually lowered the hanging coffins from above with ropes -- marks of which have been found around the coffins' sites [source: China Internet Information Center].

So when so many cultures around the world bury their dead, why did the Bo choose to do virtually the opposite? In Chinese culture, ancestors are highly respected and even revered -- placing them at a location that is physically elevated allowed the living down below to look up to their ancestors in a literal sense. The culture's mythology states that deities reside on mountaintops, which are closest to paradise. By laying their dead to rest there, the living are essentially bringing their ancestors closer to their new home with the deities [source: China Travel]. Cool, huh?

But there's one society that no coverage of coffins would be complete without mentioning. We'll talk about history's most opulent coffins and burial practices next.