Tiptoeing Through the Tombstones 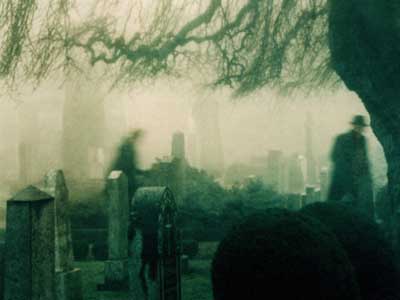 Disposing of a body isn't difficult. Bury it in the forest, cremate it or just leave the body out for vultures -- a rite Zoroastrians in India still practice. Not only are these methods cheaper than buying a fancy casket and obtaining a plot in the local cemetery, but they also allow the environment to reclaim the decaying organic material faster. The use of stone mausoleums, coffins and embalming procedures only slows down natural decomposition.

­But then again, burials aren't really about the dead -- they're about the living. We do our best to stave off some of the unsightly properties of death. And while immor­tality isn't an option, tombstones and stone monuments serve as long-lasting markers of the life that was. Uncle Steve may be out of your life for good, but a slab of engraved granite can serve as a reminder that he existed. Cemetery stonework also serves to encourage a sacred atmosphere, enforcing notions of afterlife and further establishing the site as a kind of sacred ground between life and death.

We're a race that instinctively fears death, yet we work hard to maintain hallowed spaces where the dead are memorialized and at least partially preserved. On top of that, we heap religions full of resurrection prophecies and thousands of years' worth of superstitions, folktales and ghost stories. We're constantly repressing our feelings about death or magnifying them to tremendous proportions. Maybe you avoid cemeteries and nursing homes, or actively try to speak to the dead through TV psychic mediums -- either way, you're striving to avoid the real relationship that exists between life and death.

­We've poured a lot of sacrament, superstition and fear into our graveyards, which makes for quite a powerful atmosphere. Not only do graveyards play on past memories of loss, they also invoke potentially potent themes of supernatural terror. It's not just horror movies that contribute to this frightening reputation. Cemetery preservation groups and historical societies sometimes get in on the action with haunted tours.

In more extreme cases, people actually suffer from coimetrophobia, the fear of graveyards. The condition involves a heightened, unrealistic fear of graveyards that actively interferes with a person's life. But unless walking past a cemetery makes your heart race or the words "graveyard shift" make you faint, your fear probably doesn't qualify as a phobia.

For the most part, the only things you really have to fear in graveyards are collapsing tombstones and monuments. Besides that, living, breathing humans are responsible for more graveyard assaults than all the vampires, zombies and ghouls combined.

Want to learn more about death, fear and human decay? Explore the ghastly links below.

Graves have long been a frequent haunt of legendary and mythical creatures. Sometimes they're spirits of the dead, other times simply nefarious beings who like to hang out near graves, such as the ghouls of Africa, India and the Middle East. But some monsters, like the Headless Horseman, are more afraid of graveyards than you are. In the Manx folklore of the British Isles, one sure way to avoid an attack from the terrifying buggane was to flee into the sacred protection of the churchyard. Unable to pursue you, the monster would rip its own head off and heave it in after you -- where it would shatter to pieces.