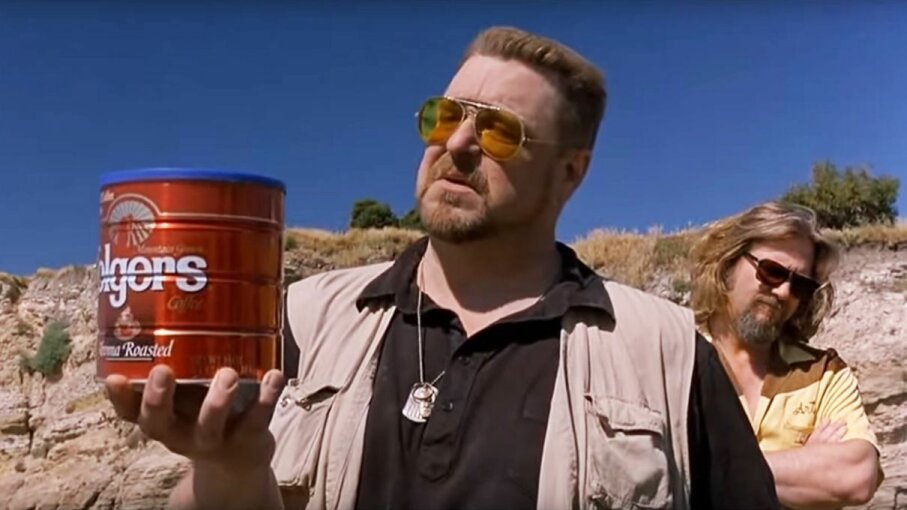 Characters in the 1998 film "The Big Lebowski" prepare to scatter the ashes of a deceased friend in a California state park. The film makes no mention of whether they acquired a permit to do so. Working Title/Polygram/Movieclips

Somebody you love dies, and it's awful. What's worse, sometimes you're even put in charge of figuring out how to deal with their remains. It's sad, it's stressful, it's a huge responsibility — and it's unfortunately complicated. Case in point: Even if your departed chose to have their remains cremated and scattered in a special place they loved in life, there are laws regulating where you can dumpout an urn full of human ashes.

Of course, most people don't know this, or even consider the laws when dealing with something so personal. Because the popularity of cremation is relatively new and the laws aren't often enforced, the laws about getting rid of ashes aren't as widely known and respected as, say, traffic laws.

But more people are choosing cremation all the time — according to the Cremation Association of North America, fewer than 4 percent of Americans chose to be cremated in 1958, but that number's expected to be around 50 percent by 2018. For centuries, cremation wasn't really done in Western countries because many churches believed it conflicted with religious doctrine — the Catholic Church, for instance, prohibited cremation until 1963, and these days the Vatican allows it under most circumstances, but insists the ashes be buried, not scattered.

But many people ask that their ashes be scattered in a place they loved after death, and while there's a greater amount of human bone ash being scattered around than ever before, it doesn't occur to most people that pouring their grandpa's ashes in his favorite fishing river could be illegal.

Although no enforcement agency exists to ride around busting people, most states have their own scattering laws, the particulars of which can vary wildly. And some federal laws take precedence over those state laws. For instance, even though the state of Texas says you can scatter ashes in a public waterway, the federal Clean Water Act prohibits scattering human ashes into freshwater bodies like lakes, rivers and streams — though in most cases it's possible to obtain permits from both the federal and state agency.

And although you can get a permit from the U.S. Environmental Protection Agency (EPA) for a burial at sea, you have to scatter the ashes at least 3 nautical miles (3.5 miles; 5.6 kilometers) from the shore. Federal laws also prohibit tossing an urn full of ashes out of an airplane or helicopter, because it could hurt somebody on the ground. You also can't trespass onto anyone's property in order to scatter ashes there unless you have written permission from the landowner, though that's a trespassing violation that'd apply regardless of why you're on that property. If you are looking to unload your loved one's ashes on public land — a National Park, say, for someone who loved the Grand Canyon, or Point Dume in Malibu, California — you have to obtain permission from the park beforehand.

These days, though, reducing a person into a jar full of ashes to be disposed of doesn't have to be the end of the line. For instance, the Neptune Society, the largest cremation provider in the U.S., owns a reef off the coast of Florida that they've turned into an underwater mausoleum. There people's cremated remains have been turned into concrete sculptures that provide habitat for sea life.

Jeff Staab, president of Cremation Solutions, a Vermont-based company that sells memorial urns and creates keepsakes and jewelry out of ashes, started his company in 2006 to provide people with information about scattering and options for crafting ashes into meaningful objects.

"So many people are afraid to scatter because they don't know what the laws are, and their loved one ends up in an urn in the closet or in the attic." says Staab. "People aren't sure how to do it, and it interferes with the healing process."

A diamond made from cremated remains by the company LifeGem sits in a setting. LifeGem extracts carbon from the ashes of cremated human remains, uses super hot ovens to transform it into graphite, then compresses it into yellow or blue diamonds.
LifeGem/Getty Images

Some companies are getting creative, and will turn cremains into coffee cups, not dissimilar to the hair of the dead being transformed to ink for memorial tattooing. Staab's company, for instance, sells biodegradable urns that dissolve in water, urns that can be converted into birdhouses after the ashes are scattered, urns that can be planted with a tree, and even the popular Loved One Launcher, a handheld ash-scattering cannon.

"People just load one of these things up with ashes, confetti and streamers and will even do it at an event with people toasting Champagne," says Staab. "They'll blast the ashes off a cliff or even right over the whole crowd, and everybody gets anointed."

Well, there's another thing to remember to ask about at a memorial service, on top of donations, flowers and dress code: Just wondering, are the cremated remains of the deceased going to be launched into the crowd?

Now That's Interesting
If you've always wanted to go to space, a company called Celestis can carry a small portion of your cremated remains on a commercial space shuttle and launch it into deep space, into Earth's orbit or onto the surface of the moon.