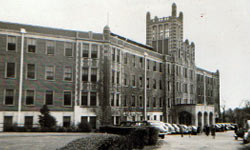 The Waverly Hills Sanatorium located just outside of Louisville, Ky., has been empty for decades and is considered to be one of the most haunted buildings in the country.
Photo courtesy of The Waverly Hills Historical Society

Louisville, a modern metropolis commonly associated with horse racing and baseball bats, hardly sounds like a place where you might go searching for ghosts -- that is, until you step onto the grounds of the old Waverly Hills Sanatorium, located just outside the city. The sprawling building has been empty for decades, and it's widely considered to be one of the most haunted buildings in the United States.

The original Waverly Hills Sanatorium, a two-story structure with a capacity of just 40 patients, was built in 1910, but an outbreak of tuberculosis prompted Jefferson County to expand the facility in 1936. An abandoned hospital always feels a bit menacing, but Waverly Hills has a darker history than most. Thousands of people died at the sanatorium, as the infectious disease took its toll on Louisville and the surrounding counties in the first half of the 20th century. To deal with the escalating death toll, hospital workers removed dead bodies from the facility via an underground tunnel that led to the back of the building. The so-called "death chute" is now a key attraction on any ghost tour of Waverly Hills, and paranormal investigators have claimed that the tunnel is haunted. Another popular attraction is room 502, where a nurse hung herself, according to local legend.

The sanatorium shut its doors in 1961, and operated as a geriatrics facility until the early 1980s. Since then, the building has been closed, and although several different developers have sought to renovate it, the building still sits empty. Due to its infamy, several professional ghost hunters have visited the building, and it has been featured on TV shows like "Ghost Adventures" and "Scariest Places on Earth".