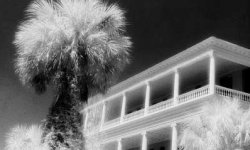 Few American cities are as beautifully preserved and historically vibrant as Charleston, S.C. In fact, not much of the city's architecture and ambience has changed since its founding in 1670 and its heyday in the 18th century as one of cultural and social capitals of the American South. But the Holy City, as it's called due to the large number of church steeples that dot the skyline, has a menacing and mysterious side.

Not only was Charleston home to some of the most wealthy socialites and politicos in the American South, but nearby Sullivan's Island was the port of entry for nearly 40 percent of U.S. slaves. Nearly half of all African Americans can trace ancestors who arrived through Sullivan's Island [source: Lee]. Additionally, pirates were executed in Charleston.

Bull Dog Tours, the only walking tour company in Charleston granted exclusive rights to go anywhere other than the sidewalks at night, guides tourists through some of the cities haunted sites, including the Old City Jail, Dungeon and the oldest graveyard in Charleston.

The Unitarian Church graveyard is one of the oldest cemeteries in the city. Senior tour guide Stephen Beard recollects that while leading a group of 20 people, he counted heads before departing the graveyard. A woman asked Beard if the group was going to wait for the other woman in the graveyard. Knowing that he had counted correctly, Beard looked back in the graveyard and saw a woman in a white dress -- only he could see straight through her body to the trees behind. The group watched her for a moment, then ran.

The Old Exchange Building and Provost Dungeon on East Bay Street was the final destination for many of the pirates that stalked the seas in the 18th century. Before he was executed for his crimes, Black Beard the pirate was jailed within the walls of the building. Many pirate hangings took place here. Additionally, the north side of the Old Exchange Building served as a slave market.

Visitors to the site report poltergeist activity -- angry ghosts acting out by making loud noises or throwing things to scare those trespassing on their territory. Additionally, tourists and guides have claimed they've been choked by ghosts. Visitors on the ghost tour have blacked out, felt extreme temperature shifts and have reported they were touched by an unseen hand. Guides say a recent tour guest was scratched by a ghost. The marks on his back were red, raised and clearly new, with no damage to his shirt.

The Old City Jail served as the County Jail for Charleston from 1802 until 1939. The area that now houses the jail was set aside in 1680 for public use and included a hospital, asylum poor house and "workhouse" for runaway slaves. Workhouse is a bit of a misnomer since slaves were essentially worked to death to pay for their crime. Torture and execution took place at the site -- people were burned at the stake, branded, and killed by drawing and quartering. The jail was frequently overcrowded, housing inmates at sometimes three times its capacity. It's estimated that 10,000 people died at this site.

One of the more infamous inmates of the jail included Lavinia Fisher, the first female serial killer in America. A few pirates waited their execution at the jail. During the Civil War, the jail housed the survivors of the 54th Mass, one of the only official African American regiments in the U.S. Army and the subjects of the film "Glory."