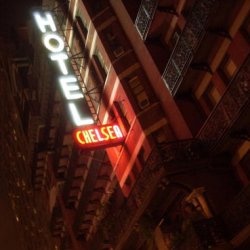 The Hotel Chelsea, home to famed celebrities, starving artists and a collection of both -- of the more spectral variety.
Theo Wargo/WireImage/Getty Images

The Hotel Chelsea has a larger-than-life reputation. Many a memorable figure has graced its halls -- and purportedly partied pretty hard in its rooms -- much to the curiosity and thrill of street-side fans. But some of those artists, musicians, writers and actors left an even more infamous legacy; they still allegedly haunt the Chelsea's rooms. From Thomas Wolfe to Dylan Thomas, to Sid Vicious and Nancy Spungen of Sex Pistols renown, celebrities sometimes apparently refuse to check out from the premises -- even after till death do us part.

Other supernatural occurrences that are said to have occurred at the Hotel Chelsea include the following [source: Ries]:

Ready for the last haunted hotel?