by Patrick J. Kiger
Prev NEXT
4

Redesigning the Flywheel to Conserve Energy 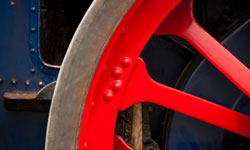 The flywheel was incorporated into the steam engine in the 1770s, and it's still in use today.
©iStockphoto.com/Thinkstock

A flywheel essentially is a disk attached to a shaft, which resists changes in rotational speed caused by fluctuations of the shaft's power source. That, in turn, keeps the shaft rotating at a consistent speed. This is hardly a new idea -- the same basic principle was used in the potter's wheel, which dates back at least 8,000 years. In the 1770s, James Watt incorporated the flywheel into his steam engine. But Beacon Power, a Massachusetts-based company, has found a new use for the concept -- storing energy and smoothing out the electrical flow in power plants.

Beacon takes 200-pound (90.7-kilogram) disks made of lightweight carbon fiber, seals them in vacuum tanks and suspends them with powerful magnets, creating flywheels that can spin faster than the top speed of a fighter jet. In conventional power plants, the high-tech flywheels are capable of storing excess energy that otherwise would be wasted, so that it can be pumped out into the grid when demand is highest. It also promises to help improve wind and solar energy-producing plants, which are vulnerable to fluctuations when the sun goes behind a cloud or the wind stops blowing [source: Bazile].