The Perils of Lazy Teleportation 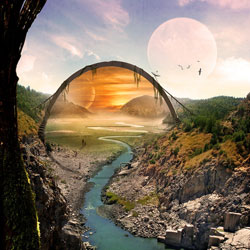 If you're familiar with "The Hyperion Cantos" by author Dan Simmons, then you know all about the Fall of the Farcasters in 2852. Before this point in history, human civilization had managed to colonize hundreds of worlds, all connected via a network of teleportation gateways called farcasters.

These wondrous passages made it possible to step instantly to distant worlds light-years away. Rivers flowed through them, creating crazy transplanetary waterways. The wealthy even used farcaster technology in their homes and offices, creating single environments that overlapped multiple worlds. Goodness knows what they did to their toilets.

You could say humanity was somewhat addicted to teleportation technology, and then, in 2852, everyone went cold turkey. The network of farcasters crashed and, unfortunately, thousands of people were still using them at the time. Some people were cut in half, others suffered amputations and still others vanished into oblivion.

And, of course, countless more found themselves stranded at home with several light-years between themselves and office. A new age of teleworking had begun.

The lesson from this horrible event? Never tarry when passing through a teleportation portal.

As the Mel Brooks film "Spaceballs" recounts, Planet Spaceball President Skroob once re-emerged from a teleporter with his head on backward. It was all the more tragic since he was merely beaming himself into the next room.